Pamlico /ˈpæmlɪkoʊ/ County is a county located in the U.S. state of North Carolina. As of the 2010 census, the population was 13,144. Its county seat is Bayboro.

The county was formed in 1872 from parts of Beaufort and Craven counties. It was named for Pamlico Sound, which adjoins it. Vernacular usage in the area, especially in Craven County, refers to Pamlico County as being "down in the county." Prior to 1872, it was a part of Craven County and has a very low elevation. Most of the county, according to FRIS, North Carolina Flood Risk Information System, much of the county is subject to flooding in storm surges. After it was separated from Craven, the old nickname survives. Pamlico County remains rural in character and flavor, although the last decade has brought a good deal of residential development, largely the result of northern retirees and investors attracted to the many miles of waterfront property.

The county is anchored on the east by the Town of Oriental, a popular waystation for boaters traveling the Intracoastal Waterway, and by unincorporated Lowland. New Bern across the county line in Craven County to the west, is the primary trade area for Pamlico County. The unincorporated community of Olympia is in the western county.

Census reports show a marked drop of nearly 10 percent in county population from 1910 to 1920, the period of the Great Migration of African Americans from rural areas of the South to northern and midwestern industrial cities offering more economic and social opportunities. Workers were recruited by northern industries, including the Pennsylvania Railroad, which was rapidly expanding at the time. 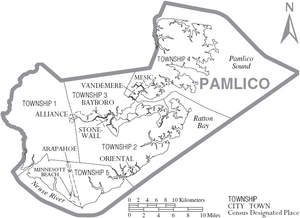 All content from Kiddle encyclopedia articles (including the article images and facts) can be freely used under Attribution-ShareAlike license, unless stated otherwise. Cite this article:
Pamlico County, North Carolina Facts for Kids. Kiddle Encyclopedia.