Hyde County is a county located in the U.S. state of North Carolina. As of the 2010 census, the population was 5,810, making it the second-least populous county in North Carolina. Its county seat is Swan Quarter. The county was created in 1705 as Wickham Precinct. It was renamed Hyde Precinct in 1712 and gained county status in 1739.

The county was formed December 3, 1705, as Wickham Precinct, one of three precincts within Bath County. The name "Wickham" was derived from the manor of "Temple Wycombe" in Buckinghamshire, United Kingdom, the family home of John Archdale, Governor of North and South Carolina from 1695 to 1696. In 1712 it was renamed Hyde Precinct, for Edward Hyde, Governor of North Carolina from 1711 to 1712. In 1739 Bath County was abolished, and Hyde Precinct became Hyde County. 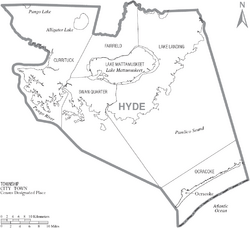 Hyde County has no incorporated municipalities.

All content from Kiddle encyclopedia articles (including the article images and facts) can be freely used under Attribution-ShareAlike license, unless stated otherwise. Cite this article:
Hyde County, North Carolina Facts for Kids. Kiddle Encyclopedia.