The northern bobwhite (Colinus virginianus), also known as the Virginia quail or (in its home range) bobwhite quail, is a ground-dwelling bird native to Canada, the United States, Mexico, and Cuba, with introduced populations elsewhere in the Caribbean, Europe, and Asia. It is a member of the group of species known as New World quails (Odontophoridae). They were initially placed with the Old World quails in the pheasant family (Phasianidae), but are not particularly closely related. The name "bobwhite" is an onomatopoeic derivation from its characteristic whistling call. Despite its secretive nature, the northern bobwhite is one of the most familiar quails in eastern North America, because it is frequently the only quail in its range. Habitat degradation has likely contributed to the northern bobwhite population in eastern North America declining by roughly 85% from 1966–2014. This population decline is apparently range-wide and continuing.

There are 23 subspecies of northern bobwhite, many of which are hunted extensively as game birds. One subspecies, the masked bobwhite (Colinus virginianus ridgwayi), is listed as endangered with wild populations located in the northern Mexican state of Sonora and a reintroduced population in Buenos Aires National Wildlife Refuge in southern Arizona. 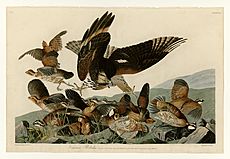 There are 23 recognized subspecies in four groups. One subspecies, the Key West bobwhite (C. v. insulanus), is extinct.

The holotype specimen of Ortyx pectoralis Gould (Proc. Zool. Soc. London, 1842 (1843), p.182.) is held in the collections of the National Museums Liverpool at the World Museum, with accession number D3713. The specimen died in the aviary at Knowsley Hall, Lancashire and came to the Liverpool national collection via the 13th Earl of Derby’s collection, which was bequeathed to the people of Liverpool in 1851.

The northern bobwhite can be found year-round in agricultural fields, grassland, open woodland areas, roadsides and wood edges. Its range covers the southeastern quadrant of the United States from the Great Lakes and southern Minnesota east to Pennsylvania and southern Massachusetts, and extending west to southern Nebraska, Kansas, Oklahoma, Colorado front-range foothills to 7,000 feet, and all but westernmost Texas. It is absent from the southern tip of Florida and the highest elevations of the Appalachian Mountains, but occurs in eastern Mexico and in Cuba, and has been introduced to Hispaniola, the Bahamas, the Turks and Caicos islands, the U.S. Virgin Islands, Puerto Rico, France, China, Portugal, and Italy . Isolated populations also have been introduced in Oregon and Washington. The northern bobwhite has also been introduced to New Zealand.

The clear whistle "bob-WHITE" or "bob-bob-WHITE" call is very recognizable. The syllables are slow and widely spaced, rising in pitch a full octave from beginning to end. Other calls include lisps, peeps, and more rapidly whistled warning calls. 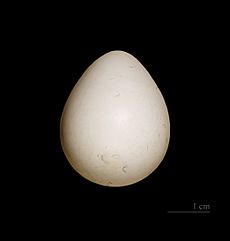 Like most game birds, the northern bobwhite is shy and elusive. When threatened, it will crouch and freeze, relying on camouflage to stay undetected, but will flush into low flight if closely disturbed. It is generally solitary or paired early in the year, but family groups are common in the late summer and winter roosts may have two dozen or more birds in a single covey.

The species was once considered monogamous, but with the advent of radio telemetry, the sexual behavior of bobwhites has better been described as ambisexual polygamy. Either parent may incubate a clutch for 23 days, and the precocial young leave the nest shortly after hatching. The main source of nest failure is predation, with nest success averaging 28% across their range. However, the nest success of stable populations is typically much higher than this average, and the aforementioned estimate includes values for declining populations.

Brooding behavior varies in that amalgamation (kidnapping, adopting, creching, gang brooding) may occur. An incubating parent may alternatively stay with its young. A hen may re-nest up to four times until she has a successful nest. However, it is extremely rare for bobwhites to hatch more than two successful nests within one nesting season.

The northern bobwhite's diet consists of plant material and small invertebrates, such as ticks, snails, grasshoppers, beetles, spiders, crickets, and leafhoppers. Plant sources include seeds, wild berries, partridge peas, and cultivated grains. It forages on the ground in open areas with some spots of taller vegetation.

Optimal nutrient requirements for bobwhite vary depending on the age of bird and the time of the year. For example, optimal protein and energy requirements for egg laying hens (23% protein) is much higher than males (16%).

Northern bobwhite were introduced into Italy in 1927, and are reported in the plains and hills in the northwest of the country. Other reports from the EU are in France, Spain, and Yugoslavia. As bobwhites are highly productive and popular aviary subjects, it is reasonable to expect other introductions have been made in other parts of the EU, especially in the U.K. and Ireland, where game-bird breeding, liberation, and naturalization are relatively common practices.

From 1898 to 1902, some 1,300 birds were imported from America and released in many parts of the North and South Islands, from Northland to Southland. The bird was briefly on the Nelson game shooting licence, but: "It would seem that the committee was a little too eager in placing these Quail on the licence, or the shooters of the day were over-zealous and greedy in their bag limits, for the Virginian Quail, like the Mountain Quail were soon a thing of the past." The Taranaki (Acclimatisation) Society released a few in 1900 and was confidant that in a year or two they might offer good sport; two years later, broods were reported and the species was said to be steadily increasing; but after another two years they seemed to have disappeared and that was the end of them. The Otago (Acclimatisation) Society imported more in 1948, but these releases did no good. After 1923, no more genuinely wild birds were sighted until 1952, when a small population was found northwest of Wairoa in the Ruapapa Road area. Since then, bobwhite have been found at several localities around Waikaremoana, in farmland, open bush and along roadsides.

More birds have been imported into New Zealand by private individuals since the 1990s and a healthy captive population is now held by backyard aviculturists and have been found to be easily cared for and bred and are popular for their song and good looks. A larger proportion of the national captive population belong to a few game preserves and game bird breeders. Though the birds would be self-sustaining in the wild if they were protected; it is tricky to guess what the effect of an annual population subsidy and hunting has on any of the original populations from the Acclimatisation Society releases. It would be fair to suggest most birds in the wild are no more than one generation from captive stock.

An albino hen was present in a covey in Bayview, Hawkes Bay for a couple of seasons sometime around 2000. 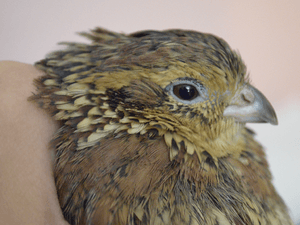 Bobwhites are generally compatible with most parrots, softbills and doves. This species should, however, be the only ground-dwelling species in the aviary. Most individuals will do little damage to finches, but one should watch that nests are not being crushed when the species perches at night. Single pairs are preferred, unless the birds have been raised together as a group since they were chicks. Some fighting will occur between cocks at breeding time. One cock may be capable of servicing several hens at once, but the fertility seems to be highest in the eggs from the preferred hen. Aviary style is a compromise between what is tolerated by the bird and what is best for the bird. Open parrot-style type aviaries may be used, but some birds will remain flighty and shy in this situation. In a planted aviary, this species will generally settle down to become quite tame and confiding. Parents with chicks will roost on the ground, forming a circular arrangement, with heads facing outwards. In the early morning and late afternoon, the cock will utter his call, which, although not loud, carries well and may offend noise-sensitive neighbors. Most breeding facilities keep birds in breeding groups on wire up off the ground. This keeps the birds clean and generally avoids diseases and parasites, which can devastate a covey. Cages with mesh floors for pairs and trios are also employed, but usually where there is a photo-period manipulation to keep birds breeding through winter.

In the wild the northern bobwhite feeds on a variety of weed and grass seeds, as well as insects. These are generally collected on the ground or from low foliage. Birds in the aviary are easily catered for with a commercial small seed mix (finch, budgerigar, or small parrot mix) when supplemented with greenfeed. Live food is not usually necessary for breeding, but will be ravenously accepted. High protein foods such as chicken grower crumble are more convenient to supply and will be useful for the stimulation of breeding birds. Extra calcium is required, especially by laying hens; it can be supplied in the form of shell grit, or cuttlefish bone.

In an open aviary, hens will lay all over the show if a nesting site and privacy are not provided. Hens that do this may lay upwards of 80 eggs in a season which can be taken for artificial incubation - and the chicks hand-raised. Otherwise, hens with nesting cover that do make a nest (on the ground) will build up 8–25 eggs in a clutch, with eggs being laid daily.

Some captive bobwhite hybrids recorded are between blue quail (scaled quail), Gambel's quail, California quail, and mountain quail. It has long been suggested that there are Japanese quail hybrids being bred commercially; however, there is a distinct lack of photographic proof to substantiate this. Inter-subspecific hybrids have been common.

The masked bobwhite subspecies, C. v. ridgwayi, is listed as endangered in the U.S. The birds were twice declared extirpated in Arizona in the past century. It was originally endemic to southern Arizona in the U.S., and northern Sonora in Mexico.

A native population historically existed in Sonora, but by 2017, its population appeared to be declining, or possibly extinct. A 2017 study recorded no wild sightings of the bird in Sonora. Decline of the species has been attributed to intense livestock grazing in an ecosystem that does not rejuvenate quickly.

A captive flock was established in Arizona in the 1970s. The George Miksch Sutton Avian Research Center (Sutton Center) became involved with conservation efforts in 2017 to establish a breeding population at the Sutton Center in Oklahoma, in order to reintroduce birds to Buenos Aires National Wildlife Refuge (BANWR) . In 2019, biologists from the Sutton Center transported 1,000 chicks by road vehicle to Buenos Aires National Wildlife Refuge. In 2020, a projected total of 1,200 birds will be transported by airplanes to BANWR. These recent actions are supplemental, and in addition to other conservation efforts in the past, seem to aid the subspecies' future conservation efforts.

All content from Kiddle encyclopedia articles (including the article images and facts) can be freely used under Attribution-ShareAlike license, unless stated otherwise. Cite this article:
Northern bobwhite Facts for Kids. Kiddle Encyclopedia.