Carrabelle is a city in Franklin County along Florida's Panhandle, United States. The population was 2,778 as of the 2010 census. Carrabelle is located east of Apalachicola at the mouth of the Carrabelle River on the Gulf of Mexico.

Carrabelle is the eastern terminus of the Gulf Intracoastal Waterway. 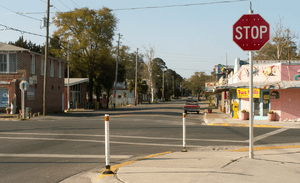 The population of Carrabelle rose from 1,303 in 2000 to 2,778 in 2010 with the expansion of the city limits to the northeast to include the Franklin Correctional Institution.

There were 562 households, out of which 26.9% had children under the age of 18 living with them, 48.0% were married couples living together, 12.1% had a female householder with no husband present, and 34.0% were non-families. Of all households 30.6% were made up of individuals, and 12.3% had someone living alone who was 65 years of age or older. The average household size was 2.30 and the average family size was 2.83.

For many decades, Carrabelle had the only tertiary sewage treatment facility in the State of Florida, but this may have been updated in recent years.

In 1528 the first Spanish expedition of Pánfilo de Narváez passed through the area on its way from Tampa Bay to the Rio Grande. From the late 17th century through early 18th century a few passages referring to the area are mentioned. Carrabelle, Dog Island, and St. George Island served as points to stage raids on local ports as well as San Marcos de Apalache in 1677 and 1682.

In 1876 explorer Nathaniel Holmes Bishop of Medford, Massachusetts, navigated the Crooked River through the lowlands east to the Ochlockonee River. In 1877, Oliver Hudson Kelly from Massachusetts founded the town and named it "Rio Carrabella". The following year the first U.S. post office was established with its address as Rio Carrabella. By 1881 the population was between 500 and 600 people.

In 1891 the Carrabelle, Tallahassee and Georgia Railroad was established to connect Carrabelle northward through Tallahassee to the Florida-Georgia line and eventually terminating in Augusta, Georgia.

On August 1, 1899, the 2nd hurricane of the season struck the area, almost destroying the town and leaving just nine homes.

In 1942, Camp Gordon Johnston was opened for the purpose of training amphibious soldiers on nearby beaches. The camp trained a quarter of a million men and closed in 1946.

On August 23, 2008, Tropical Storm Fay made its record fourth landfall in the state of Florida at Carrabelle. 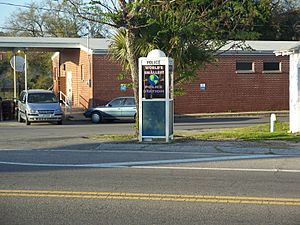 Carrabelle is the home of the "World's Smallest Police Station", which came into being on March 10, 1963. The city had been having problems with tourists making unauthorized long distance phone calls on its police phone. The phone was located in a call box that was bolted to a building at the corner of U.S. 98 and Tallahassee Street. Johnnie Mirabella, St. Joe Telephone's lone Carrabelle employee at the time, first tried moving the call box to another building, but the illegal calls continued.

Mirabella noticed that the policeman would get drenched while answering phone calls when it was raining. So when the telephone company decided to replace its worn out phone booth in front of Burda's Pharmacy with a new one, he decided to solve both problems at once by putting the police phone in the old booth.

With the help of Curly Messer, who was a deputy sheriff at the time, Mirabella moved the phone booth to its current site on U.S. 98. The booth did protect the officers from the elements, but some people still sneaked into it to make long distance calls. Eventually the dial was removed from the phone, making it impossible for tourists to make calls.

It has been featured on television shows Real People, Ripley's Believe It or Not, The Today Show, and The Tonight Show Starring Johnny Carson. It was featured in the movie Tate's Hell, which was produced at Florida State University. Along with police station T-shirts—the design is copyrighted—there are police station hats, visors, postcards, and calendars.

But life has not always been easy for the retired St. Joseph Telephone and Telegraph Company phone booth. Vandals have ripped phones out of the booth and shot holes through the glass. It has been knocked over by a pickup truck, a tourist once asked a gas station attendant to help him load it into his vehicle to take it back to Tennessee, and it was knocked over and damaged by Hurricane Kate. 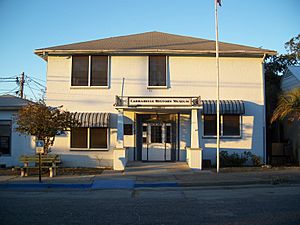 Carrabelle has a local history museum, the Carrabelle History Museum, which is located at 106 Avenue B, SE in the Marvin Justiss building, also known as "Old City Hall". The museum is free and open on Thursday, Friday and Saturday from 10 am to 4 pm and by appointment other days, for visitors interested in learning about the history of Carrabelle and the area. 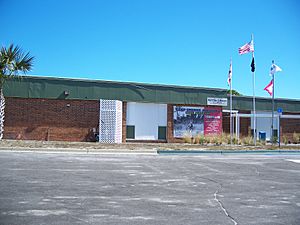 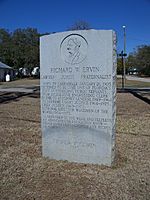 All content from Kiddle encyclopedia articles (including the article images and facts) can be freely used under Attribution-ShareAlike license, unless stated otherwise. Cite this article:
Carrabelle, Florida Facts for Kids. Kiddle Encyclopedia.