Marana is a town in Pima County, Arizona, located northwest of Tucson, with a small portion in Pinal County. According to the 2010 census, the population of the town is 34,961. Marana was the fourth fastest-growing place among all cities and towns in Arizona of any size from 1990 to 2000.

The town extends along Interstate 10 from the line between Pinal and Pima County to the Tucson city line, except the area around the non-affluent unincorporated community of Rillito. The town has a history of farming and ranching. The Tucson Mountains and the western half of Saguaro National Park are located to the south. Phoenix is approximately 90 minutes north via Interstate 10.

The southern portion of Marana has grown considerably since the early 1990s with the addition of businesses and some housing, much of it due to annexation of existing unincorporated areas. In 1992, the Marana Town Council voted to annex an area of unincorporated Pima County that was located to the southeast of the town limits. The area selected was a narrow corridor of land that snaked its way south along Interstate 10, then to the east along Ina Road, and then south along Thornydale Road. These areas were mainly high density commercial businesses and shopping centers, including large retailers such as Super KMart (now closed), Costco Wholesale, Target, and Home Depot. The areas were selected by Marana to be annexed, by their own admission, for their sales tax revenue. As a result, the city of Tucson filed a lawsuit in the Superior Court of the State of Arizona in and for the County of Pima (City of Tucson v Town of Marana) claiming that Marana illegally annexed the unincorporated areas in violation of existing state laws. However, on April 4, 1994, Judge Lina Rodriguez ruled in favor of Marana, allowing the annexation to stand. Following this suit, the Arizona State annexation laws were changed, forbidding municipalities from annexing small strips of land without taking large surrounding parcels as well. A “strip annexation” is no longer allowed under Arizona law.

There were 11,759 households out of which 32.5% had children under the age of 18 living with them, 63.2% were married couples living together, 8.2% had a female householder with no husband present, and 24.6% were non-families. 19.3% of all households were made up of individuals and 5.1% had someone living alone who was 65 years of age or older. The average household size was 2.81 and the average family size was 3.17. 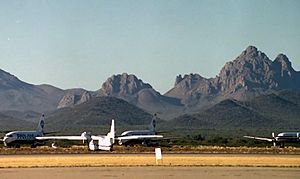 Archaeologists have found about 4,200 years of continuous human settlement in the vicinity of Marana and the middle Santa Cruz Valley. Many important archaeological sites occur near Marana.

According to historian David Leighton, the first Anway in the Tucson area was Charles B. Anway, who arrived as a result of contracting tuberculosis. In 1919, brother William and his two children Louis and Ila arrived in town but they decided to settle in an area northwest of Tucson called Postvale, Arizona. In 1920, William who had been widowed for many years married Orpha Ralston, who was a member for many years in the Postvale Co-operative Women’s Club. This club was involved in getting the local post office renamed from Postvale to the area's first known name Marana and in time the town name became Marana.

Louis in 1925 married a former classmate named Erma and would have four sons. Ed, Roy, Dick and later on David. Erma worked as a bus driver transporting students to Postvale School.

By 1943, Louis was working as a tenant farmer at the Cortaro Farms. Due to the labor shortage during World War II, he and other tenant farmers were given permission to use Italian prisoners of war to work their fields. The use of prisoners of war as labor in the Marana area is believed to have continued until the end of the war.

Four years later, Louis purchased ranch land owned by Peter Manville in Avra Valley, just west of Marana. Louis became the first known person to drill an irrigation well in the Avra Valley, work the land and make the valley prosper, bringing other farmers to the valley. Driving day after day from Marana to his property in Avra Valley he realized he could shorten his trip by creating a shortcut to his land. Using a Caterpillar with a blade he constructed a road from present-day Avra Valley Road south to Manville Road therefore lessening his drive time. This dirt path in 1951 was named Anway Road.

In time he and the rest of his sons moved to the valley and Louis and his eldest son Ed opened the Avra Valley Dairy which existed for many years. Louis passed away in 1980. 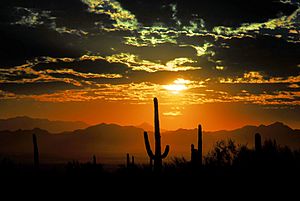 All content from Kiddle encyclopedia articles (including the article images and facts) can be freely used under Attribution-ShareAlike license, unless stated otherwise. Cite this article:
Marana, Arizona Facts for Kids. Kiddle Encyclopedia.