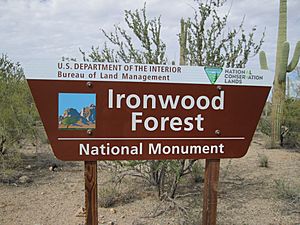 Ironwood Forest National Monument is located in the Sonoran Desert of Arizona. Created by Bill Clinton by Presidential Proclamation 7320 on June 9, 2000, the monument is managed by the Bureau of Land Management, an agency within the United States Department of the Interior. The monument covers 129,055 acres (52,227 ha), of which 59,573 acres (24,108 ha) are non-federal and include private land holdings and Arizona State School Trust lands.

A significant concentration of ironwood (also known as desert ironwood, Olneya tesota) trees is found in the monument, along with two federally recognized endangered animal and plant species. More than 200 Hohokam and Paleo-Indian archaeological sites have been identified in the monument, dated between 600 and 1450. 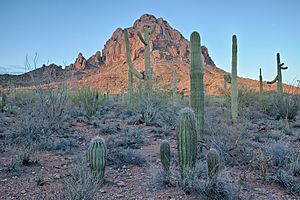 An array of flora are present in the Ironwood Forest National Monument. The higher elevations have the pinyon-juniper woodland plant community. The lower elevations are in the Sonoran Desert ecoregion. One of the notable trees native here is the elephant tree (Bursera microphylla). Small populations of the endangered Nichols turk's head cactus, although not found among ironwood trees, occur in very localized limestone-rich areas within the monument.

The desert ironwood (Olneya tesota) is a very long-lived tree, with some specimens estimated to be more than 800 years old. Desert ironwood is a keystone species because it provides a nursery environment of shade and protection that enables young seedlings of other species to become established despite the harsh desert climate, where daytime high temperatures can exceed 105 °F (41 °C). The ironwood also provides shade and roosting area habitats for birds. Its smoky lavender-colored blossoms provide nectar for bees and other insects, as well as forage for animals. The blossoms produce bean pods which also provide food for desert animals.

Lists of dominant plants in the prehistoric ecology and plant community of the Waterman Mountains area in the monument have been published in a sequence that currently dates back to the last glacial period, the Late Wisconsin glacial period. Dominant trees of that era, based upon pollen records, were Utah juniper (Juniperus osteosperma), single-leaf pinyon (Pinus monophylla), and redberry juniper (Juniperus pinchotii), and understory plants included Monardella arizonica.

According to Proclamation 7320, 674 plant and animal species have been identified in the Silver Bell Mountains within the monument, including 64 species of mammals and 57 species of birds, although the Bureau of Land Management has been unable to verify those claims. Recent studies by the Arizona-Sonora Desert Museum, however, have documented 560 plant species. Resident birdwatchers have documented more than 80 species of migratory and non-migratory birds.

One specimen of the endangered lesser long-nosed bat (Leptonycteris curasoae) and a night roost were documented within the monument by bat researchers Karen Krebbs and Yar Petryszyn. They concluded that while the monument may be an important feeding stopover during spring migrations, the presence of L. curasoae in the monument is probably low or incidental. Leptonycteris curasoae is one of only a few bat species that migrate long distances, coming from as far south as Jalisco, Mexico, more than 1,600 miles (2,570 km).

The Arizona desert bighorn sheep herd located within the monument is the last remaining relict population of desert bighorn sheep in southeastern Arizona, having first migrated into North America during the Pleistocene epoch. One or two specimens of the cactus ferruginous pygmy owl, which was listed as an endangered species in March 1997 and delisted by court order April 14, 2006, have been found within and near the monument by licensed surveyors.

The Hohokam people were the first miners in the area. They mined andesite, which was useful for making agave knives. Andesite knives that originated from Hohokham mines within the monument perimeter have been found as far south as the Gulf of California in Mexico.

Silver and copper mining began in the Silver Bell Mountains around 1850 and continues today. Bighorn sheep ewes prefer mine tailings for lambing grounds because the high, steep and open terrain enables them to see and escape from predators.

The Ironwood Forest National Monument is managed for multiple uses including recreation, cattle grazing and mining, although new mining claims and motorized off-road travel are prohibited by the establishing Proclamation. Livestock grazing, which has occurred continuously for at least the last 125 years within the monument, is currently managed at very light or conservative levels of approximately one cow per every 300 to 400 acres (1.6 km2). Domestic sheep and goats are prohibited as a protection to the bighorn sheep. The monument offers almost no surface water but contains sufficient groundwater resources.

The cattle ranchers maintain more than 80 individual man-made water sources within the monument, in addition to the 14 water sources maintained by the Arizona Game and Fish Department and the Arizona Desert Bighorn Sheep Society. The presence of human-supplied water supports the exceptional abundance of birds, mule deer, coyotes, foxes, bobcats, mountain lions and other wildlife found in the monument.

All content from Kiddle encyclopedia articles (including the article images and facts) can be freely used under Attribution-ShareAlike license, unless stated otherwise. Cite this article:
Ironwood Forest National Monument Facts for Kids. Kiddle Encyclopedia.