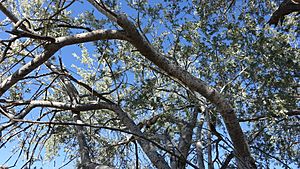 Olneya tesota is a perennial flowering tree of the family Fabaceae, legumes (peas, beans, etc.), which is commonly known as ironwood, desert ironwood, or palo fierro in Spanish. It is the only species in the monotypic genus Olneya. This tree is part of the western Sonoran Desert complex in the Southwestern United States, which includes flora such as palo verde, saguaro, ocotillo, brittlebush, creosote bush, and mesquite.

The desert ironwood grows as a bush or tree and reaches heights of about 10 metres (33 ft), and average trunk diameters of about 60 cm (24 in); in exceptional sites in larger protected washes it can reach greater height and a more massive trunk.

In younger trees, the bark is gray, shiny, and smooth; in older trees the bark is broken open. The tree is an evergreen plant, but can lose its leaves if temperatures fall below 2 °C (36 °F). In continual drought conditions leaves will be lost.

The desert ironwood, Olneya, is native to the southwestern United States and extreme northwestern Mexico in the Baja California Peninsula and the Sonoran Desert, and is partially an indicator species of that desert. Within Mexico its range includes the states of Baja California Sur and Baja California, on the Gulf of California side east of the cordillera ranges, and Sonora state west of the Sierra Madre Occidental cordillera, in the south approaching the northern border of northern Sinaloa state. In the southwestern US its range includes the Colorado Desert of southeast Southern California, a part of the Sonoran Desert, and western and southern Arizona. Olneya does not range into the higher-elevation, colder, southeast of Arizona's Sonoran Desert region, nor into the sky islands of the Madrean Sky Islands region.

In the north, both species define the Colorado Desert subregion of the Sonoran Desert surrounding the northern end of the Gulf of California; further south in the Baja Peninsula the sub-division is defined as the Vizcaino Desert.

The winter and permanent range of the bat extend into the northern countries of Central America.

The pleasant-tasting sap is consumed by bees and hummingbirds. The silky-flycatcher or phainopepla pose a problem, for when they consume mistletoe berries and excrete them in the cracks of Olneya tesota, the mistletoe will parasitize its host.

The seeds can be eaten by first being roasted.

Olneya ironwood is very hard and heavy. Its density is greater than water and thus sinks; it does not float downstream in washes, and must be moved by current motion.

Due to its considerable hardness, processing desert ironwood is difficult. Final treatment of the wood with solutions can also be difficult because of its high density. As a result, mass processing of this wood is difficult, and most of its commercial usages are artisanal, such as durable wooden sculptures as well as knife handles.

All content from Kiddle encyclopedia articles (including the article images and facts) can be freely used under Attribution-ShareAlike license, unless stated otherwise. Cite this article:
Olneya Facts for Kids. Kiddle Encyclopedia.