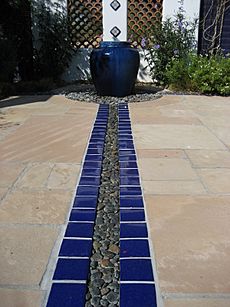 Casas Adobes (Spanish: "Adobe Houses") is an unincorporated community and census-designated place (CDP) located in the northern metropolitan area of Tucson, Arizona (in Pima County). The population was 66,795 at the 2010 census. Casas Adobes is situated south and southwest of the town of Oro Valley, and west of the community of Catalina Foothills.

The attempted assassination of Representative Gabby Giffords, and the murders of chief judge for the U.S. District Court for Arizona, John Roll, and five other people on January 8, 2011, took place at a Safeway supermarket in Casas Adobes.

Though Casas Adobes is an unincorporated community, it is older than both the towns of Oro Valley and Marana. Casas Adobes is notable for having the upscale shopping center, Casas Adobes Plaza, its only shopping mall, Foothills Mall, a major hospital, Northwest Medical Center, and the only botanical park, Tohono Chul Park. Casas Adobes primarily consists of homes situated on large lots (often in excess of 1 acre (4,000 m2)), and is suburban in character.

Established in the 1940s, the Casas Adobes community has grown to encompass a 23-square-mile (60 km2) area inhabited by nearly 60,000 residents. Casas Adobes takes its name from a large residential subdivision of the same name developed by Silvio "Sam" Nanini and his family. Most of the homes in the subdivision are large ranch-style homes built with adobe bricks.

However, the history of the Casas Adobes area predates the arrival of Sam Nanini. The area bordering the Cañada del Oro in the north, and the Rillito River in the south was primarily inhabited and utilized by cattle ranchers. Cattle ranches dominated the Casas Adobes area until the 1920s, when Tucson had grown far enough north and the advent of the automobile made the area more easily accessible.

One of the first individuals to build a home in the area was Maurice L. Reid, who came to Tucson in 1923 seeking a "walking cure" for tuberculosis. In the late 1920s Reid bought a 1,500 acres (6.1 km2) former ranch, bounded by North Oracle Road to the east, Orange Grove Road to the south, Ina Road to the north, and North La Cholla Boulevard to the west. Reid planted more than 200 acres (0.81 km2) of citrus trees and date palms, that would become the heart of Tucson's citrus industry. Over the years, Reid sold parcels of land for home sites, and in 1950 he sold the last of his land. Some larger residential estates continue to maintain the remaining citrus groves and orchards nearly a century later.

Leonie Boutall, who relocated to Arizona from Tennessee, decided to build a guest ranch in the early 1930s. The dry climate, her doctor told her, would relieve her bronchial troubles. Boutall bought 100 acres (0.40 km2) of former ranch land just west of North Oracle Road, and south of a narrow dirt track now called Orange Grove Road. She built Rancho Nezhone, a luxury guest ranch that drew the rich and famous to the sparsely settled area far north of Tucson. Kate Smith, Liberace, Gen. John Pershing and William "Hopalong Cassidy" Boyd were guests of the desert retreat. Boutall sold out of the property in 1948.

In the late 1940s, further north along Oracle Road, Sam Nanini would ultimately make his mark in the area. Nanini and his wife, Giaconda, moved to Tucson in 1948 seeking to cure Giaconda Nanini's bronchial asthma. Beginning in the mid-1950s, the Italian born, transplanted Chicagoan developed three residential subdivisions on about 300 acres (1.2 km2) that became the heart of the Casas Adobes community, giving the community its name. The subdivisions, along with Sam Nanini’s landmark Casas Adobes Plaza, were considered by many to be Tucson's first suburb. Sam Nanini and his son William also later built the world-class Tucson National Resort, and the million-dollar residential subdivision, the Tucson National Estates.

While Casas Adobes' neighboring municipalities of Oro Valley, Marana and Tucson continue to build new homes and shopping centers, Casas Adobes is mostly built out. An attempt to incorporate the community failed in 2001, and it is likely that one or all three of the neighboring entities will annex portions of Casas Adobes in the future.

Casas Adobes was the first suburb of Tucson, begun in the mid-1940s. Casas Adobes has numerous notable points of interest.

The Casas Adobes Plaza is a historical retail destination, dating back to 1948. The Plaza is situated on the southwest corner of North Oracle and West Ina roads, and features some of the most authentic Mediterranean architecture in the area. Original Italian vignettes, statues, and fountains are incorporated into Casas Adobes Plaza. The Plaza also features a historic Mediterranean observation tower. 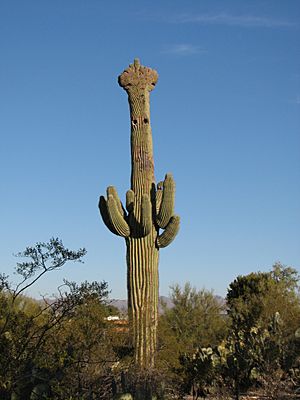 Casas Adobes is also the location of one of southern Arizona's largest and most biologically diverse nature preserves. Tohono Chul Park is a private nature park located northwest of North Oracle and West Ina roads on North Paseo del Norte. Tohono Chul, Tohono O'odham for "desert corner," was created in 1985 after Richard and Jane Wilson dedicated their historic home and property to the preservation of the desert and the education of visitors on the splendor of the native plants and wildlife.

Westward Look Resort is located in Casas Adobes. Westward Look began in the early 20th century as a dude ranch in the foothills of the Santa Catalina Mountains north of Tucson.

Casas Adobes is home to a nationally prominent golf resort built in the 1960s, the Omni Tucson National Resort. While Casas Adobes remains unincorporated, the community has distinguished itself from the other suburbs to the north and northwest of Tucson as the oldest community.

All content from Kiddle encyclopedia articles (including the article images and facts) can be freely used under Attribution-ShareAlike license, unless stated otherwise. Cite this article:
Casas Adobes, Arizona Facts for Kids. Kiddle Encyclopedia.