Kathryn Elizabeth Smith (May 1, 1907 – June 17, 1986), known professionally as Kate Smith and The First Lady of Radio, was an American singer, a contralto, best known for her rendition of Irving Berlin's "God Bless America".

She had a radio, television, and recording career spanning five decades, which reached its pinnacle in the 1940s. Smith became known as The Songbird of the South after her enduring popularity during World War II and contribution to American culture and patriotism.

Kathryn Elizabeth Smith was born in Greenville, Virginia, growing up in Washington, D.C. Her father owned the Capitol News Company, distributing newspapers and magazines in the greater D.C. area. As a baby, she failed to talk until she was four years old, but a year later she was singing in church socials. By the time she was eight, she was singing for the troops at Army camps in the Washington area during World War I. Smith never had a singing lesson in her life and possessed a 'rich range' of two and a half octaves. Her earliest performances were during amateur nights at vaudeville theaters in D.C. 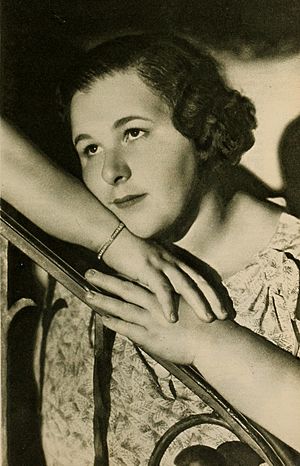 Smith began recording in 1926. Her professional musical career began in 1930, when she was discovered by Columbia Records artists-and-repertoire executive Ted Collins, who became her longtime manager in 50–50 partnership. She later credited Collins with helping her overcome her self-consciousness, writing, "Ted Collins was the first man who regarded me as a singer, and didn't even seem to notice that I was a big girl." She noted, "I'm big, and I sing, and boy, when I sing, I sing all over!" Collins put Smith on radio in 1931.

In 1932, Smith appeared in Hello, Everybody!, with co-stars Randolph Scott and Sally Blane, and in the 1943 wartime film This is the Army she sang "God Bless America".

From January 25 to July 18, 1960, Smith hosted The Kate Smith Show, a variety program on the CBS Television Monday evening schedule. On October 2, 1966, Smith performed on the British television show, Sunday Night at the London Palladium.

Because of her popularity, her face was a common sight in print advertisements of the day. Over the years, she acted as a commercial spokeswoman for numerous companies such as Studebaker, Pullman, Diamond Crystal Salt, and Jell-O. 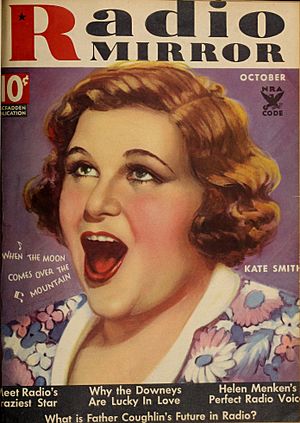 Kate Smith released dozens of successful recordings during the 1930s and 1940s. She recorded on and off during the 1950s but in 1963 signed a contract with RCA Victor releasing a number of successful albums including several that charted on the Billboard Hot 200 chart alongside the major rock stars of the era, then well into her fifties, the oldest performer on the charts.

In 1967 she had her first new hit record in many years when "Anyone Can Move A Mountain" peaked at #30 pn Billboard's Easy Listening Hits chart in July 1967. This record was her only 1960s single release to be successful. In 1974 Smith returned to Billboard's Easy Listening chart when "Smile, Smile, Smile" a one-shot single release (and her last recording) for Atlantic Records peaked at #42 in June 1974.

Smith, who never married, rented several apartments in Manhattan during her long career. She had a home in Arlington, Virginia, and kept a summer home on a small island in Lake Placid, New York.

After attending services at a Roman Catholic parish for 25 years, Smith converted to Roman Catholicism in 1965. During the time she spent in Lake Placid, she regularly attended Sunday mass at St. Agnes Roman Catholic Church and could always be heard singing the hymns in her unforgettable contralto voice. 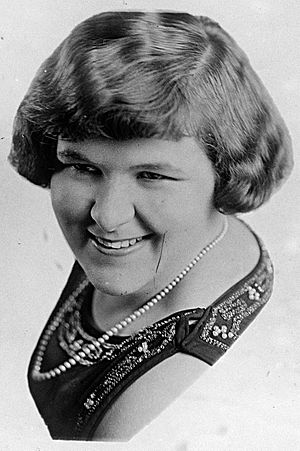 In her later years, Smith was impaired by diabetes. In 1976, she suffered brain damage after slipping into a diabetic coma. In January 1986, her right leg was amputated due to poor circulation caused by diabetes. Five months later, she underwent a mastectomy. On June 17, 1986, Smith died of respiratory arrest at Raleigh Community Hospital in Raleigh at the age of 79.

For over a year following her death, Smith's remains were stored in a vault at St. Agnes Cemetery in Lake Placid, while officials of St. Agnes Church and the singer's executors engaged in a dispute over Smith's request to be buried in a mausoleum on the cemetery's grounds. Her private burial service took place on November 14, 1987.

She did a command performance for King George VI and Queen Elizabeth at the White House on June 8, 1939. She received a Drake University medallion for "outstanding contributions to radio and the people." Smith was inducted posthumously into the Radio Hall of Fame in 1999. She was inducted into the North Carolina Music Hall of Fame in 2009. In 2010, a U.S. commemorative stamp was issued featuring stamp art duplicating artwork created for the cover of a CD titled Kate Smith: The Songbird of the South. The artwork was based on a photograph of Smith taken in the 1960s. 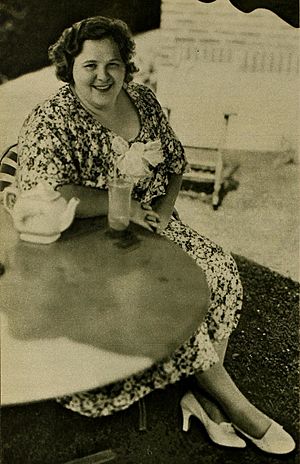 The voice of Kate Smith is known and loved by millions of Americans, young and old. In war and peace, it has been an inspiration. Those simple but deeply moving words, 'God bless America,' have taken on added meaning for all of us because of the way Kate Smith sang them. Thanks to her they have become a cherished part of all our lives, an undying reminder of the beauty, the courage and the heart of this great land of ours. In giving us a magnificent, selfless talent like Kate Smith, God has truly blessed America.

All content from Kiddle encyclopedia articles (including the article images and facts) can be freely used under Attribution-ShareAlike license, unless stated otherwise. Cite this article:
Kate Smith Facts for Kids. Kiddle Encyclopedia.