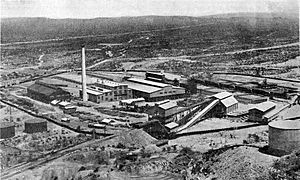 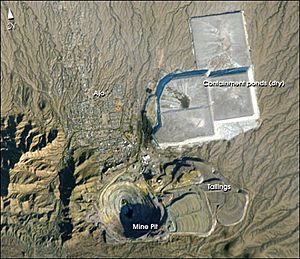 Ajo and the New Cornelia mine. NASA photo

Ajo ( AH-hoh; O'odham: Moik Wahia or O'odham: ʼOʼoho) is a census-designated place (CDP) in Pima County, Arizona, United States. The population was 3,705 at the 2000 census. Ajo is located on State Route 85 just 43 miles (69 km) from the Mexican border. It is the closest community to Organ Pipe Cactus National Monument.

Ajo is the Spanish word for garlic. The Spanish may have named the place using the familiar word in place of the similar-sounding O'odham word for paint (oʼoho). The Tohono O'odham people obtained red paint pigments from the area.

Native Americans, Spaniards and Americans have all extracted mineral wealth from Ajo's abundant ore deposits. In the early nineteenth century, there was a Spanish mine nicknamed "Old Bat Hole" that was abandoned due to Indian raids. Tom Childs, Sr., found the deserted mine complete with a 60-foot (18 m) shaft, mesquite ladders, and rawhide buckets in 1847. He did not stay long at that time, because he was on his way to the silver mines near Magdalena de Kino, Sonora.

Three and a half decades later, Childs and his son returned with a friend and started developing the abandoned mine.

In the year 1884, the camp at Ajo was practically abandoned. Not a soul was in camp when Tom Childs Sr., and his son arrived. With them was Washington Michael Jacobs of Tucson, Arizona...Childs and Jacobs located the mining claim which constituted most of the old Ajo group of mines. They made a permanent camp and worked the mines.

High-grade native copper made Ajo the first copper mine in Arizona. Soon the Arizona Mining & Trading company, formed by Peter R. Brady, a friend of Childs, worked the rich surface ores, shipping loads around Cape Horn for smelting in Swansea, Wales, in the mid-1880s. The mine closed when a ship sank off the coast of Patagonia. Long supply lines and the lack of water discouraged large mining companies

With the advent of new recovery methods for low-grade ore, Ajo boomed. In 1911, Col. John Campbell Greenway, a Rough Rider and star Yale athlete, bought the New Cornelia mine from John Boddie. He became general manager of the Calumet and the Arizona mining company and expanded it on a grand scale. The Tucson, Cornelia & Gila Bend Railroad was built from Gila Bend to serve the mining industry and was in service from 1916 to 1985. In 1921, Phelps Dodge, the nation's largest copper company, bought New Cornelia and the mine became the New Cornelia Branch of Phelps Dodge, managed by Michael Curley. For several decades more than 1,000 employees worked for Phelps Dodge in the open pit mine. In 1983 union-affiliated mine employees went on strike. The mine continued with non-union labor for a short while before stopping production in 1985.

Ajo is now home to many retired people, to Border Patrol agents, and young families.

Plants of the Sonoran Desert thrive around Ajo, including saguaros and ocotillos. The Ajo lily or desert lily, an onion-like plant, also grows in the area.

This area has a large amount of sunshine year round due to its stable descending air and high pressure. According to the Köppen Climate Classification system, Ajo has a hot desert climate, abbreviated BWh on climate maps. Rainfall is very low except during occasional monsoonal or frontal incursions, and is especially minimal between April and June. Since 1914 the wettest calendar year has been 1946 with 15.33 inches (389.4 mm) – including a record daily fall of 4.15 inches (105.4 mm) on 18 September – and the driest 1928 with 3.33 inches (84.6 mm). Temperatures are very hot from April to October and mild to warm from November to March, with extremes ranging from 17 °F (−8.3 °C) on 22 January 1937 during that month’s record Western cold wave, to 117 °F (47.2 °C) on 31 July 1995.

There were 1,659 households out of which 19.7% had children under the age of 18 living with them, 51.4% were married couples living together, 10.6% had a female householder with no husband present, and 34.4% were non-families. 30.1% of all households were made up of individuals and 17.1% had someone living alone who was 65 years of age or older. The average household size was 2.23 and the average family size was 2.74.

All content from Kiddle encyclopedia articles (including the article images and facts) can be freely used under Attribution-ShareAlike license, unless stated otherwise. Cite this article:
Ajo, Arizona Facts for Kids. Kiddle Encyclopedia.