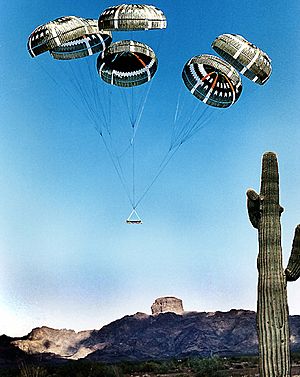 Yuma Proving Ground (YPG) is a United States Army facility and one of the largest military installations in the world. Situated in southwestern La Paz County and western Yuma County in southwestern Arizona, U.S., approximately 30 miles (48 km) north-east of the city of Yuma, the proving ground is used for testing military equipment and encompasses 1,307.8 square miles (3,387.2 km²) in the northwestern Sonoran Desert.

The proving ground conducts tests on nearly every weapon system in the ground combat arsenal. Munitions and artillery systems are tested here in an area almost completely removed from urban encroachment and noise concerns. Restricted airspace controlled by the test center amounts to over 2,000 square miles (5,000 km2). Over 3000 people, mostly civilian, work at the proving ground. It is a major economic player in Yuma County, with an economic impact of over $430 million annually. Yuma Proving Ground is the largest single employer of civilians in the county.

In a typical year, over 500,000 artillery, mortar and missile rounds are fired, 36,000 parachute drops take place, 200,000 miles (320,000 km) are driven on military vehicles, and over 4000 air sorties are flown from the proving ground’s Laguna Army Airfield. Though about 90 percent of the proving ground's workload is devoted to the test and evaluation of weapon systems and munitions, training activities are important. Dozens of units visit the proving ground each year for realistic desert training, especially before deploying overseas.

Yuma Proving Ground features the longest overland artillery range (40 miles or 64 kilometres) in the nation, the most highly instrumented helicopter armament test range in the Department of Defense, over 200 miles (300 km) of improved road courses for testing tracked and wheeled military vehicles, over 600 miles (1,000 km) of fiber-optic cable linking test locations, and the most modern mine and demolitions test facility in the western hemisphere. Realistic villages and road networks representing urban areas in Southwest Asia have been constructed and are used for testing counter-measures to the threat of roadside bombs.

Yuma Proving Ground's clean air, low humidity, skimpy rainfall—only about 3 inches (76 mm) per year—and annual average of 350 sunny days, add up to almost perfect testing and training conditions. Urban encroachment and noise concerns are nonexistent problems, unlike at many other military installations. An excellent two-way relationship has developed between the proving ground and local community elected officials and community leaders.

Of the four extreme natural environments recognized as critical in the testing of military equipment, three fall under the management authority of Yuma Proving Ground. Realistic natural environment testing ensures that American military equipment performs as advertised, wherever deployed around the world. The proving ground manages military equipment and munitions testing at three locations: The Cold Regions Test Center at Fort Greely, Alaska; the Tropic Regions Test Center operating in Panama, Honduras, Suriname, and Hawaii; and at the Yuma Test Center located at Yuma Proving Ground. The common link between these test centers is "environmental testing," which makes the proving ground the Army's environmental test expert.

U.S. Army Yuma Proving Ground is a subordinate command of the Army Test and Evaluation Command.

The Army constructed a second facility in 1865, the Yuma Quartermaster Depot, to act as a supply base for Army posts throughout Arizona and parts of New Mexico. Supplies were delivered by riverboats and transported from the depot to military outposts by wagon. After Fort Yuma and the Yuma Quartermaster Depot closed in the 1880s, the Army did not to return to Yuma on a permanent basis until World War II.

Yuma Proving Ground traces its history to Camp Laguna and the Army Corps of Engineers Yuma Test Branch, both activated in 1943. Located on the Colorado River, the Yuma Test Branch conducted testing on combat bridges, amphibious vehicles, and boats. Tens of thousands of mechanized and infantry soldiers were trained at Camp Laguna for duty at combat fronts throughout the world, from North Africa to the South Pacific. Abandoned campsites and tank trails can still be found on the proving ground.

Camp Laguna lasted only until the end of World War II. The Yuma Test Branch was closed in 1949 and reactivated two years later as the Yuma Test Station, under the operational control of the Sixth U.S. Army. In 1962, the station was named Yuma Proving Ground and reassigned to the U. S. Army Materiel Command as an important component of the Test and Evaluation Command. On July 26, 1973, it officially received its full name—U.S. Army Yuma Proving Ground. The following year it was designated as a Department of Defense Major Range and Test Facility Base.

Since its early days, Yuma Proving Ground has been a desert environmental test center for all types of military equipment and materiel. However, developmental and a variety of other types of testing of artillery systems and ammunition, aircraft armament and targeting systems, mobility equipment, and air delivery systems, not necessarily desert environmental-related, now comprise the bulk of the workload. A heavy investment in technology and a highly skilled soldier-civilian workforce makes the proving ground a significant social and economic component of the local community 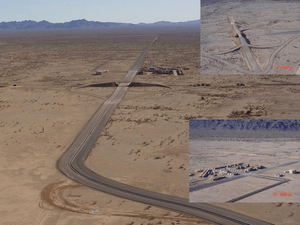 Aerial view of one of the facilities at Yuma Test Center

Current and recent tests include:

All content from Kiddle encyclopedia articles (including the article images and facts) can be freely used under Attribution-ShareAlike license, unless stated otherwise. Cite this article:
Yuma Proving Ground Facts for Kids. Kiddle Encyclopedia.