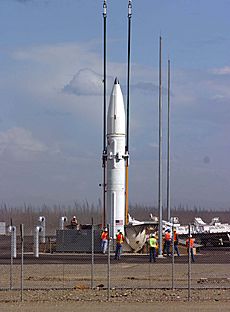 A Ground-Based Interceptor, designed to destroy incoming Intercontinental ballistic missiles, is lowered into its silo at the missile defense complex at Fort Greely, Alaska, July 22, 2004.

Fort Greely is a census-designated place (CDP) in Southeast Fairbanks Census Area, Alaska, United States. It is home to the Fort Greely military installation. At the 2010 census the population was 539, up from 461 in 2000.

Because of its remote location, Fort Greely was chosen as one of the first US military posts to have a compact, nuclear power reactor to generate heat and electricity, under the auspices of the Army Nuclear Power Program. A nuclear power plant, designated the SM-1A was flown-in and installed between 1960–62, and was based on the Army's first prototype reactor, the SM-1 at Fort Belvoir, Virginia. SM-1A pressurized-water reactor reached initial criticality on 13 March 1962, and was shut down in 1972: the reactor core was removed and sent to the Savannah River nuclear site.

Fort Greely first appeared as an unincorporated military installation on the 1970 U.S. Census. It was made a census-designated place (CDP) in 1980.

Of the 126 households, 73.8% had children under the age of 18 living with them, 80.2% were married couples living together, 7.1% had a female householder with no husband present, and 11.1% were non-families. 11.1% of all households were made up of individuals, and none had someone living alone who was 65 years of age or older. The average household size was 3.25 and the average family size was 3.53.

Fort Greely is mostly sunny in the summer and split between clear and overcast days in the winter. On clear winter nights, the aurora borealis can often be seen dancing in the sky. Like all subarctic regions, the months from May to July in the summer have no night, only a twilight during the night hours. The months of November to January have little daylight.

All content from Kiddle encyclopedia articles (including the article images and facts) can be freely used under Attribution-ShareAlike license, unless stated otherwise. Cite this article:
Fort Greely, Alaska Facts for Kids. Kiddle Encyclopedia.