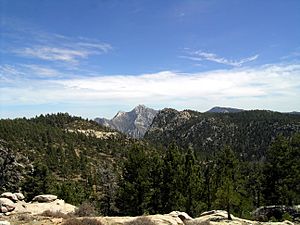 The range is a drainage divide that demarcates the drainages flowing west into the Pacific Ocean or east into the Gulf of California for this section of the Baja California Peninsula. Snow is usually present at the highest elevations in the winter.

The Sierra de Juárez are on the north, and Sierra de San Francisco are on the south, both are also part of the Peninsular Ranges System. 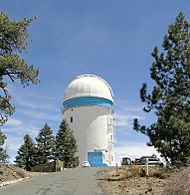 The National Astronomical Observatory is located at an elevation of 2,830 m (9,280 ft) in the range. The astronomical complex was built in 1975. It has several large telescopes, the largest of which is 2.12 m (83 in) in diameter. The observatory's site takes advantage of the high elevation, along with typically clear skies, low relative humidity, low atmospheric pollution, low light pollution, and low levels of radio interference.

The range was a site considered for construction of the Thirty Meter Telescope, now tentatively planned for a controversial site on Mauna Kea in Hawaii.

In 1889, there was a gold rush in the Santa Clara mountains about sixty miles southeast of Ensenada. 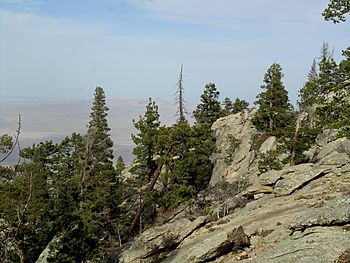 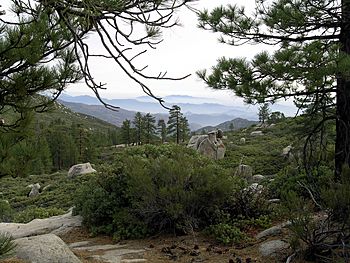 The flora is distinct from that of 'mainland' Mexico across the Gulf of California to the east, and shares many species with the Laguna Mountains and Cuyamaca Mountains, also Peninsular Ranges, in San Diego County, California. Typical conifer species include white fir, sugar pine and Jeffrey pine. The canyons of the lower eastern Sierra de Pedro Mártir are the southern range demarcation of natural California fan palm (Washingtonia filifera) distribution. Arizona cypress (Cupressus arizonica) can be found with Canyon live oaks (Quercus chrysolepis) and California fan palms.

California condors, zoo-bred from the San Diego Zoo Safari Park condor program, were reintroduced into the Sierra San Pedro Martir in 1987, the first time seen in the range since 1937. Each year, a small group of young California condors are selected from the pool of birds being bred by the Los Angeles Zoo, San Diego Zoo Safari Park, Oregon Zoo, and The Peregrine Fund for release to the wild. Annual releases range from four to seven zoo-bred birds.

All content from Kiddle encyclopedia articles (including the article images and facts) can be freely used under Attribution-ShareAlike license, unless stated otherwise. Cite this article:
Sierra de San Pedro Mártir Facts for Kids. Kiddle Encyclopedia.