The Peninsular Ranges (also called the Lower California province) are a group of mountain ranges that stretch 1,500 km (930 mi) from Southern California to the southern tip of the Baja California Peninsula; they are part of the North American Coast Ranges, which run along the Pacific Coast from Alaska to Mexico. Elevations range from 500 to 10,834 feet (152 to 3,302 m). 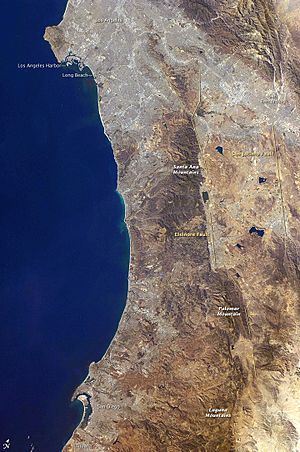 Topographic depiction of the Peninsular Mountains within the US consisting of the Santa Ana, Palomar and Laguna Mountains from north to south

Rocks in the ranges are dominated by Mesozoic granitic rocks, derived from the same massive batholith which forms the core of the Sierra Nevada Mountains in California. They are part of a geologic province known as the Salinian Block which broke off the North American Plate as the San Andreas Fault and Gulf of California came into being.

Between this set of ranges and the Transverse Ranges is the complex Malibu Coast—Santa Monica—Hollywood fault, which exists as the border between these two mostly geologically unitary provinces. 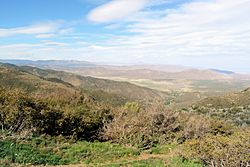 View from Inspiration Point in the Laguna Mountains, 2013. Chaparral in the foreground, Anza Borrego Desert State Park on the right of the background.

All content from Kiddle encyclopedia articles (including the article images and facts) can be freely used under Attribution-ShareAlike license, unless stated otherwise. Cite this article:
Peninsular Ranges Facts for Kids. Kiddle Encyclopedia.