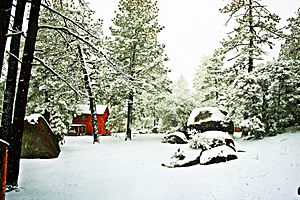 Snow in the Sierra de Juárez.

The Sierra de Juárez, also known as the Sierra Juarez, is a mountain range located in Tecate Municipality and northern Ensenada Municipality, within northern Baja California state of northwestern Mexico.

The Sierra de Juárez begins just south of the international frontier with California and extends about 140 kilometres (87 mi) southwards. The highest peak in the range rises to about 1,980 meters (6,500 ft) elevation at 31° 30′ 34″ North Latitude and 115° 32′ 5″ West Longitude. The Laguna Mountains (U.S.) are on the north, and the Sierra de San Pedro Mártir (México) are on the south. The Sierra forms part of the Baja California Peninsular Ranges.

According to the Mexican government agency, CONABIO, the Sierra de Juárez occupies a total area of 4,568 square kilometres (1,764 sq mi) approximately 140 kilometres (87 mi) long and averaging about 33 kilometres (21 mi) wide. On the east the Sierra de Juárez rises sharply from the desert valley containing the Laguna Salada Fault, a southern extension of the San Andres Fault. The western slope of the Sierra is more gentle.

A portion of the Sierra de Juárez is protected within Constitution 1857 National Park, approximately 72 kilometres (45 mi) east of Ensenada. The scenic Laguna Hanson, an important stopover for migratory birds, and the endemic pine-oak forests habitat are within the park.

The lower elevations of the eastern slopes are in the Sonoran Desert ecoregion, with its unique desert flora. The California Fan Palm (Washingtonia filifera) is near the southern natural limit of its range in the Sierra de Juárez.

The western flank of the range lies at the southeastern extremity of the Mediterranean climate region, that extends across much of California and into northwestern Baja California. CONABIO lists the climates (Köppen climate classification) of the Sierra de Juarez as consisting of 30 percent desert (BW), 7 percent steppe (BS), 27 percent mesothermal with precipitation evenly distributed (Cfa, Cfb) throughout the year, and 36 percent Mediterranean (Csa, Csb) with precipitation concentrated in the winter months.

All content from Kiddle encyclopedia articles (including the article images and facts) can be freely used under Attribution-ShareAlike license, unless stated otherwise. Cite this article:
Sierra de Juárez Facts for Kids. Kiddle Encyclopedia.