North of 30° north latitude on the Pacific slope, the Baja California desert transitions to the California coastal sage and chaparral. The Sierra Juárez and San Pedro Mártir pine-oak forests occupy the higher Peninsular Ranges to the north, where a number of tree species are found including the near-threatened California fan palm. The Sonoran Desert lies to the northeast. The Gulf of California xeric scrub lies east of the Peninsular Ranges and to the south.

The climate is dry and mostly subtropical with the southernmost parts being tropical. Although rainfall is low, the Pacific Ocean provides some humidity and moderates the temperature compared to the Sonoran desert, which lies on the east slope of the Peninsular Ranges.

The ecoregion is mostly covered by xeric shrubs, which create varying associations based on elevation and soil conditions. The ecoregion has close to 500 species of vascular plants, of which a number are endemic, for example the Boojum tree (Fouquieria columnaris) or Creeping Devil (Stenocereus eruca). 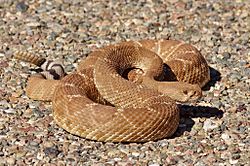 A 2017 assessment found that 45,940 kilometers squared, or 60 percent, of the ecoregion is in protected areas. Protected areas include El Vizcaíno Biosphere Reserve and Valle de los Cirios Flora and Fauna Protection Area; both protected areas extend into the adjacent Gulf of California xeric scrub ecoregion.

All content from Kiddle encyclopedia articles (including the article images and facts) can be freely used under Attribution-ShareAlike license, unless stated otherwise. Cite this article:
Baja California Desert Facts for Kids. Kiddle Encyclopedia.