The peninsula is separated from mainland Mexico by the Gulf of California and the Colorado River. There are four main desert areas on the peninsula: the San Felipe Desert, the Central Coast Desert, the Vizcaíno Desert and the Magdalena Plain Desert.

The land of California existed as a myth among European explorers before it was discovered. The earliest known mention of the idea of California was in the 1510 romance novel Las Sergas de Esplandián by Spanish author Garci Rodríguez de Montalvo. The book described the Island of California as being west of the Indies, "very close to the side of the Terrestrial Paradise; and it is peopled by black women, without any man among them, for they live in the manner of Amazons."

Following Hernán Cortés' conquest of Mexico, the lure of an earthly paradise as well as the search for the fabled Strait of Anián, helped motivate him to send several expeditions to the west coast of New Spain in the 1530s and early 1540s. Its first expedition reached the Gulf of California and California, and proved the Island of California was in fact a peninsula. 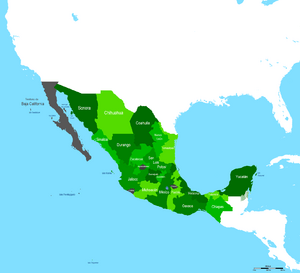 Mexico in 1854, with Baja California Territory in gray (left)

The province of the Californias was united until 1804, in the Spanish colonial Viceroyalty of New Spain, when it was divided into Alta (upper) and Baja (lower) California. 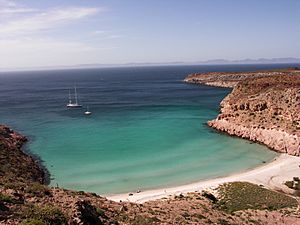 Isla Partida, which is part of the San Lorenzo Marine Archipelago National Park 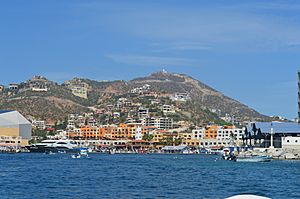 The Baja California Peninsula was once a part of the North American Plate, the tectonic plate of which mainland Mexico remains a part. About 12 to 15 million years ago the East Pacific Rise began cutting into the margin of the North American Plate, initiating the separation of the peninsula from it. Spreading within the Gulf of California consists of short oblique rifts or ridge segments connected by long northwest trending transform faults, which together comprise the Gulf of California Rift Zone. The north end of the rift zone is located in the Brawley seismic zone in the Salton Sea basin between the Cerro Prieto Fault and the San Andreas Fault. The Baja California Peninsula is now part of the Pacific Plate and is moving with it away from the East Pacific Rise in a north northwestward direction.

Along the coast north of Santa Rosalia, Baja California Sur is a prominent volcanic activity area.

Volcanoes of the peninsula and adjacent islands include:

Researchers from Scripps Institution of Oceanography have found a 2,000-year-old layer of non-decomposed roots, or peat, up to four meters (13 feet) under the desert mangroves. The peat layer acts like a sponge for stored atmospheric carbon, a record of sea-level-rise is also recorded in the peat layer.

The desert mangroves restricted to rocky inlets on the rugged coast of Baja California have been growing over their own root remains over thousands of years to compensate for sea-level rise, accumulating a thick layer of peat below their roots. However, mangroves in flat coastal floodplains have accumulated a thinner peat layer. 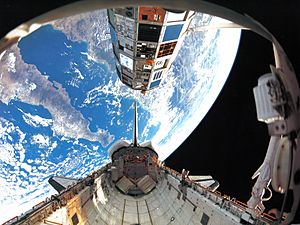 The Peninsular Ranges form the backbone of the peninsula. They are an uplifted and eroded Jurassic to Cretaceous batholith, part of the same original batholith chain which formed much of the Sierra Nevada mountains in U.S. California. This chain was formed primarily as a result of the subduction of the Farallon Plate millions of years ago all along the margin of North America.

The two most prominent capes along the Pacific coastline of the peninsula are Punta Eugenia, located about halfway up the coast, and Cabo San Lazaro, located about a quarter of the way north from Cabo San Lucas.

The Bahia Sebastian Vizcaino, the largest bay in Baja, lies along the Pacific coast halfway up the peninsula. The large island of Isla Cedros is situated between the bay and the Pacific, just north of Punta Eugenia. Onshore southeast of the bay is the Desierto de Vizcaino, an extensive desert lying between the Sierra Vizcaino to the west, and the Tres Virgenes range which runs along the Gulf of California to the east.

The largest bays along the coastline of the Gulf are Bahia de La Paz where the city of La Paz is located, and Bahia Concepcion. The Bahía de los Ángeles is a small bay located west of the Canal de las Ballenas which separates the Baja California peninsula from the large island of Angel de la Guarda in the Gulf of California.

The peninsula is known colloquially as Baja by American and Canadian tourists, and is renowned for its natural beauty and pristine environment. It draws ecotourists who go whale watching for migrating California Gray Whales as well as tourists that arrive to the Baja California Gold Coast and resorts on the southern tip of the Peninsula. Its location between the North Pacific and Gulf of California give it a reputation for good sports fishing.

All content from Kiddle encyclopedia articles (including the article images and facts) can be freely used under Attribution-ShareAlike license, unless stated otherwise. Cite this article:
Baja California Peninsula Facts for Kids. Kiddle Encyclopedia.