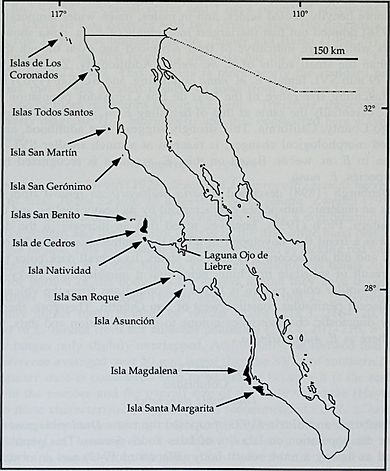 Cedros Island (Isla de Cedros, "island of cedars" in Spanish) is an island in the Pacific Ocean belonging to the state of Baja California, Mexico. The dry and rocky island had a population of 1,350 in 2005 and has an area of 348 square kilometres (134 sq mi) which includes the area of several small nearby islands. Cedros Island is mountainous, reaching a maximum elevation of 1,205 metres (3,953 ft). The economy is based on commercial fishing and salt mining. Cedros has a distinctive flora and the traces of some of the earliest human beings in the New World. The ocean around the island is popular with sport fishermen.

There was human presence of the island already about 11,000 years ago. The American Indian inhabitants when the island was first visited by Spanish explorers in the 16th century called it Huamalgua, the "Island of Fogs." The Indian inhabitants have been given the name Huamalgueños by modern day scholars. They were relocated to the mainland of Baja California by Jesuit missionaries in 1732 and ceased to exist as an identifiable people.

Cedros Island is located in Ensenada Municipality, off the west coast of the Mexican state of Baja California, from which it is separated by 100-kilometre (62 mi)*-wide Sebastián Vizcaíno Bay. It is 22 km (14 mi) northwest of Punta Eugenia in Mulegé Municipality - the westernmost point of the state of Baja California Sur mainland. It also lies 15 km (9.32 mi) north of Isla Natividad (off Punta Eugenia, and also part of Mulegé Municipality) from which it is separated by the Canal de Keller, and some 500 km (311 mi) from San Diego. The island has an area of 348.295 km2 (134.477 sq mi), being the fourth-largest island in Mexico (following Tiburón Island, Isla Ángel de la Guarda, and Cozumel).

Between Cedros Island and Isla Natividad runs the 28th parallel north, which defines the border between the Mexican states of Baja California and Baja California Sur. The Islas San Benito, about 25 km (16 mi) west and 3.899 km2 (1.505 sq mi) in area, are administratively part of Cedros Island.

The Isla de Cedros was named by early Spanish explorers who mistakenly associated the large amounts of redwood and cedar driftwood arriving with the California current for local pines visible on the crest of the island. 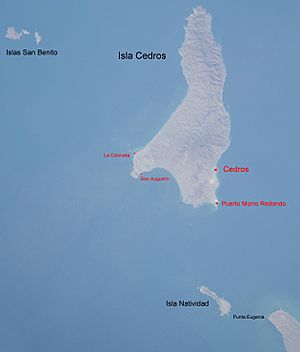 It constitutes one of the 24 subdivisions (delegaciones) of the municipio of Ensenada. The 2005 census showed a total population of 1,350 persons.

The borough "seat" is Cedros town ("Pueblo Cedros"), on the southern east coast. Pueblo Cedros is largely associated with Pescadores Nacionales de Abulón, the lobster and abalone fishing cooperative based on the island. It was founded by fishermen in 1922.

The second town is Puerto Morro Redondo (in short, El Morro), close to the southeastern point of the island, El Morro. It is a "company town," built by the joint Mexican Government and Mitsubishi Corporation to house the workers of the salt-transshipment facility on the island. Salt from the salt evaporation ponds of Guerrero Negro on the Baja California peninsula is taken by barge to a deepwater salt dock near Puerto Morro Redondo, at the south end of Cedros Island, where it is loaded onto ships for export. There is regularly scheduled air service to the island from Ensenada, departing every Monday and Wednesday, and landing at an airstrip at the south end, adjacent to the "company town," while a 10 km (6 mi) road leads to "Pueblo Cedros". Open launch rides across the channel between Cedros and the mainland can also be arranged at the Abarrotes Ramales store in Bahia Tortugas, but travellers opting for this transport should be prepared to have a flexible schedule with several extra days in case of inclement weather conditions in the Channel.

The remaining settlements are smaller. Jerusalem is just west of El Morro, but on the western side of the airport, with regularly arranged residential units. It is frequently considered part of El Morro.

Lomas Blancas, a mining town with 17 buildings, is located between Cedros town and El Morro.

San Agustín, a typical fishing village with about 20 buildings, is located 1 km (0.6 mi) northeast of the southwestern point of the island, Cabo San Agustín.

La Colorada, on the southern west coast, with about 10 buildings, is 4 km (2 mi) north of San Agustín.

Wayle, 15 buildings on the western side of the southern bight Bahía del Sur, is 3 km (1.9 mi) northeast of San Agustín.

The mining town of Punta Norte (about 25 buildings) is located on the northern east coast, 3.5 km (2.2 mi) southeast of the northern end of the island, which is also called Punta Norte. two kilometres (1 mi) to the southeast is Los Crestones mine.

Isla Cedros was home to some of the earliest occupants of the Pacific Coast of North America, and its later indigenous inhabitants had developed a way of life finely attuned to the conditions of this arid but resource-rich island. They had probably reached an overall population around 1,000-1,200 inhabitants by the time of European contact. These native peoples possessed sophisticated maritime technology and watercraft and depended largely on ocean resources for their livelihood.

These peoples were Cochimí speakers, related to the Native American tribes of Southern California, the lower Colorado River, and Western Arizona.

In 1539, when the Spanish expedition led by Francisco de Ulloa landed on the island, it encountered several villages with populations at each estimated in the hundreds. Finding it difficult to reach the remaining Indians on the island, the Jesuit missionaries practiced Indian reductions and brought them all to Misión San Ignacio Kadakaamán, in San Ignacio on the Baja California mainland in 1732.

Hunters seeking seals and sea otters worked out the island between 1790 and 1850.

Gold and copper mining took place near Punta Norte between 1890 and 1917. The fishing village and cannery at Puerto Cedros were established in 1920. The fishing cooperative was founded in 1943, and the deepwater salt dock at the south end of the island was built in 1966. The island was mapped in detail by Mexican and U.S. geologists during the 1970s.

Cedros Island is at most some 3 kilometres (1.9 mi) long in N-S direction and 6.4 to 8 kilometres (4 to 5 mi) wide in the northern half; the southern end is some 17 kilometres (11 mi) wide in a NW-SE direction. The island consists of a variety of sedimentary, metamorphic, and igneous rocks, including part of an ophiolite complex and high-pressure, low temperature blueschists. Most of the rocks are of Mesozoic age, though some late Cenozoic strata crop out near the town in the southeastern corner of the island. Its highest peak, Monte Cedros, has an elevation of 1,205 metres (3,953 ft).

The island is often shrouded in fog, so that some plants have adapted to receiving moisture from fog. The west side of the island is windswept and subject to heavy surf; Pacific hurricanes are not unusual. The lower elevations, in particular the south, receive very little rainfall, and desert vegetation prevails. At higher elevations and in the north, there are trees like Quercus cedrosensis live oaks, California juniper, and Monterey pines. Vargas or El Aguaje de Vargas is the most important spring with a flow of 180 drums of 200 lts or 55 US gal (208 l; 46 imp gal) each 12 hours; springs on the island are usually marked by groves of palm trees.

Large sea lion colonies are found on the rocks on the west side as well as the anchorage on the north end.

There are feral goats on Cedros. Unlike on other islands in the region (notably Guadalupe Island), they do not seem to have had a significant impact on the island ecosystem. This would be due to the fact that Cedros is on the continental shelf close to the coast and, at least temporarily, it must have been connected to the mainland during the last ice age when sea levels were lower than today. Then, and as a consequence of this, there are native to Cedros herbivores, which on one hand compete with the goat population for food and presumably have kept it from increasing beyond carrying capacity, and on the other hand forced the native plants to keep their defenses against herbivores, unlike plants on megaherbivoreless islands which tend to lack those defenses.

Cedros Island is home to a number of taxa that are endemic to or occur in very few places outside the island. These include:

The island is featured in the 2012 movie Act of Valor, in which U.S. Navy SEALs attack a terrorist training camp on the island.

All content from Kiddle encyclopedia articles (including the article images and facts) can be freely used under Attribution-ShareAlike license, unless stated otherwise. Cite this article:
Cedros Island Facts for Kids. Kiddle Encyclopedia.