Juniperus californica, the California juniper, is a species of juniper native to southwestern North America.

As the name implies, it is mainly in numerous California habitats, although its range also extends through most of Baja California, a short distance into the Great Basin in southern Nevada, and into northwestern Arizona. In California it is found in: the Peninsular Ranges, Transverse Ranges, California Coast Ranges, Sacramento Valley foothills, Sierra Nevada, and at higher elevation sky islands in the Mojave Desert ranges. 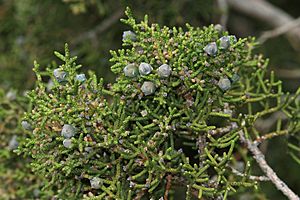 The cones are berry-like, 7 to 13 mm (0.28 to 0.51 in) in diameter, blue brown with a whitish waxy bloom, turning reddish brown, and contain a single seed (rarely two or three). The seeds are mature in about 8 or 9 months. The male cones are 2 to 4 mm (0.079 to 0.157 in) long, and shed their pollen in early spring. This juniper is largely dioecious, producing cones of only one sex, but around 2% of plants are monoecious, with both sexes on the same plant.

The California juniper is closely related to Juniperus osteosperma (Utah juniper) from further east, which shares the stout shoots and relatively large cones, but differs in that Utah juniper is largely monoecious. Also, its cones take longer to mature (two growing seasons), and it is also markedly more cold tolerant.

The plant was used as a traditional Native American medicinal plant, and as a food source, by the indigenous peoples of California, including the Cahuilla people, Kumeyaay people (Diegueno), and Ohlone people. They gathered the berries to eat fresh and to grind into meal for baking. The wood from the juniperus californica also used for sinew-backed bows.

Juniperus californica is cultivated as an ornamental plant, as a dense shrub (and eventual tree) for use in habitat gardens, heat and drought-tolerant gardens, and in natural landscaping design. It is very tolerant of alkali soils, and can provide erosion control on dry slopes. California Juniper is also a popular species for bonsai.

An IUCN least concern listed species, and not considered globally threatened currently. However, one of the southernmost populations, formerly on Guadalupe Island off the Baja California Peninsula coast, was destroyed by feral goats in the late 19th century.

All content from Kiddle encyclopedia articles (including the article images and facts) can be freely used under Attribution-ShareAlike license, unless stated otherwise. Cite this article:
California juniper Facts for Kids. Kiddle Encyclopedia.