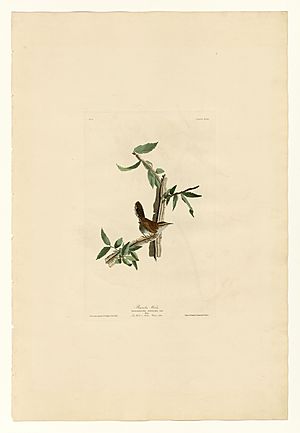 Illustration from Audubon's The Birds of America

The Bewick's wren (Thryomanes bewickii) is a wren native to North America. At about 14 cm (5.5 in) long, it is grey-brown above, white below, with a long white eyebrow. While similar in appearance to the Carolina wren, it has a long tail that is tipped in white. The song is loud and melodious, much like the song of other wrens. It lives in thickets, brush piles and hedgerows, open woodlands and scrubby areas, often near streams. It eats insects and spiders, which it gleans from vegetation or finds on the ground.

Its historic range was from southern British Columbia, Nebraska, southern Ontario, and southwestern Pennsylvania, Maryland, south to Mexico, Arkansas and the northern Gulf States. However, it is now extremely rare east of the Mississippi River.

In 1827 the American ornithologist John James Audubon included an illustration of Bewick's wren under the binomial name Troglodytes bewickii in his The Birds of America. In the companion Ornithological Biography, published four years later, Audubon explained that he had shot the specimen near St. Francisville, Louisiana in 1821 and had chosen the specific epithet bewickii in honour of his friend the engraver Thomas Bewick. Bewick's wren is now the only species placed in the genus Thryomanes that was introduced by the English zoologist Philip Sclater in 1862.

The Socorro wren was formerly also placed in Thryomanes, but is now known to be a close relative of the house wren complex, as indicated by biogeography and mtDNA NADH dehydrogenase subunit 2 sequence analysis, whereas Thryomanes seems not too distant from the Carolina wren.

Fifteen subspecies are recognised of which two are now extinct. Subspecies can be distinguished by the small differences in the color of the dorsal feathers but this can be difficult for museum specimens as the colors tend to change after a few years of storage.

The Bewick's wren has an average length of 5.1 inches (13 cm) an average weight of 0.3 to 0.4 ounces (8 -12 g), and a wingspan of 18 cm. Its plumage is brown on top and light grey underneath, with a white stripe above each eye. Its beak is long, slender, and slightly curved. Its most distinctive feature is its long tail with black bars and white corners. It moves its tail around frequently, making this feature even more obvious for observers.

Juveniles look similar to adults, with only a few key differences. Their beaks are usually shorter and stockier. In addition, their underbelly might feature some faint speckling. Males and females are very similar in appearance.

Bewick's wrens, like many wrens, are very vocal. Both females and males make short calls while foraging and both use a harsh scolding call when agitated. Males also sing in order to attract mates and protect their territory. The song is broken into two or three individual parts; one individual male may exhibit up to twenty-two different variations on the song pattern, and may even throw in a little ventriloquism to vary it even further. A male wren learns its song from neighboring males, so its song will be different from its father's. 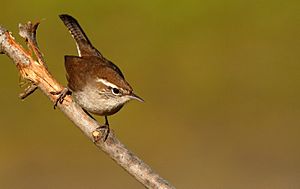 The Bewick's wren once had a range that extended throughout much of the United States and Mexico and parts of Canada. It used to be fairly common in the Midwest and in the Appalachian Mountains, but it is now extremely rare east of the Mississippi River. It is still found along the Pacific Coast from Baja California to British Columbia, in Mexico, and in a significant portion of the Southwest, including Texas, Arizona, New Mexico, and Oklahoma. Western populations do not tend to migrate. Eastern populations, prior to their decline, used to migrate from its northern range to the Gulf Coast.

The preferred habitat of the Bewick's wren is that of arid open woodlands and brush-filled areas such as hillsides and uplands, but will reside in humid areas locally (Subtropical and Temperate zones). They are more common than house wrens in drier habitats, such as those found in the Southwest. In California, Bewick's wrens inhabit a shrubland area called chaparral.

Bewick's wrens are insect eaters. They glean insects and insect eggs from vegetation, including the trunks of trees. They typically do not feed on vegetation higher than 3 meters, but they will forage on the ground. Bewick's wrens are capable of hanging upside down in order to acquire food, such as catching an insect on the underside of a branch. When it catches an insect, it kills the insect prior to swallowing it whole. Bewick's wrens will repeatedly wipe their beaks on its perch after a meal.

Bewick's wrens will visit backyard feeders. They will eat suet, peanut hearts, hulled sunflower seeds, and mealworms. Like many insect-eating birds, the Bewick's wren widens its diet to include seeds in the winter.

Courtship begins with the male singing from its perch. It will occasionally pause its song in order to chase its competitors. Bewick's wrens form monogamous pairs that will then forage together. The male wren begins building the nest in a cavity or birdhouse, with the female joining in later. The nest is constructed from twigs and other plant materials and is often lined with feathers. The nest is cup-shaped and located in a nook or cavity of some kind. It lays 5–7 eggs, which are white with brown spots. The Bewick's wren produces two broods in a season. Pairs are more or less monogamous when it comes to breeding, but go solitary throughout the winter.

In 2016, the Bewick's wren was listed as least concern on the IUCN Red List of threatened species due to the size of its range and estimates of its population size. However, ornithologists have noted a severe decline in its eastern range and parts of its western range. In particular, it has virtually disappeared from east of the Mississippi. In 1984, the state of Maryland classified the Bewick's wren as endangered under its Maryland Endangered Species Act of 1971. Despite this classification, no breeding pairs of Bewick's wrens are known to remain in Maryland. In 2014, the North American Bird Conservation Initiative placed the eastern Bewick's wren on its watch list.

In Washington, development has actually benefited the Bewick's wren, leading to an increase in its population. However, this has coincided with the decline of the Pacific wren thanks to increased competition between the two species.

All content from Kiddle encyclopedia articles (including the article images and facts) can be freely used under Attribution-ShareAlike license, unless stated otherwise. Cite this article:
Bewick's wren Facts for Kids. Kiddle Encyclopedia.