The Pacific wren (Troglodytes pacificus) is a very small North American bird and a member of the mainly New World wren family Troglodytidae. It was once lumped with Troglodytes hiemalis of eastern North America and Troglodytes troglodytes of Eurasia as the winter wren.

It breeds along the Pacific coast from Alaska to California and inland as far as Wyoming and the Black Hills of South Dakota. It migrates through and winters across the western half of the United States and Canada.

The scientific name is taken from the Greek word "troglodytes" (from "trogle" a hole, and "dyein" to creep), meaning "cave-dweller", and refers to its habit of disappearing into cavities or crevices whilst hunting arthropods or to roost.

Rufous brown above, richly colored below, barred with darker brown and dusky, even on wings and tail. The bill is dark brown, the legs pale brown. Young birds are less distinctly barred.

The Pacific wren nests mostly in coniferous forests, especially those of spruce and fir, where it is often identified by its long and exuberant song. Although it is an insectivore, it can remain in moderately cold and even snowy climates by foraging for insects on substrates such as bark and fallen logs.

Its movements as it creeps or climbs are incessant rather than rapid; its short flights swift and direct but not sustained, its tiny round wings whirring as it flies from bush to bush.

At night, usually in winter, it often roosts, true to its scientific name, in dark retreats, snug holes and even old nests. In hard weather it may do so in parties, either consisting of the family or of many individuals gathered together for warmth.

For the most part insects and spiders are its food, but in winter large pupae are taken and some seeds. 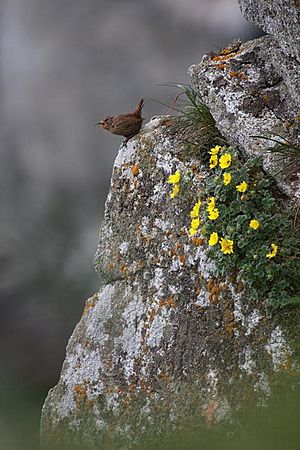 The male builds a small number of nests. These are called "cock nests" but are never lined until the female chooses one to use.

The normal round nest of grass, moss, lichens or leaves is tucked into a hole in a wall, tree trunk, crack in a rock or corner of a building, but it is often built in bushes, overhanging boughs or the litter which accumulates in branches washed by floods.

Five to eight white or slightly speckled eggs are laid in April, and second broods are reared.

All content from Kiddle encyclopedia articles (including the article images and facts) can be freely used under Attribution-ShareAlike license, unless stated otherwise. Cite this article:
Pacific wren Facts for Kids. Kiddle Encyclopedia.