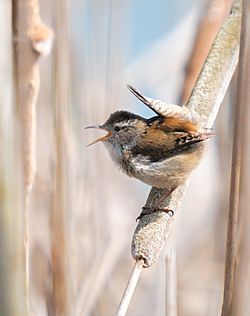 The marsh wren, Cistothorus palustris, one of the many American wrens

The wrens are passerine birds in the mainly New World family Troglodytidae. There are about 80 species in about 20 genera. The Wren is also the shortest bird in Britain.

Originally, the word 'wren' was (and still is) used for the species found in Europe, western Asia and North Africa. The word came into English after a long history in the Germanic languages. The bird's scientific name is Troglodytes troglodytes. When European biologists got to the Americas, they soon realised that the family of wrens has many species, and is mainly an American family of birds.

Most wrens are about 10 centimetres (4 inches) long, brown (both sexes), and has a short bill that curves slightly down. Its wings are round and it has a short tail.

Its song is a gushing burst of sweet music, loud and emphatic. It has an enormous voice for its size, ten times louder, weight for weight, than a cockerel. Its song may sometimes be confused for the dunnock, which has warble that is shorter and weaker. The wren's song also has trill sounds, which the dunnock does not. The male has a long and complex song, with a series of tinkling trills one after the other for seconds on end.

When this bird is annoyed or excited, its call runs into an emphatic churr, like clockwork running down.

All content from Kiddle encyclopedia articles (including the article images and facts) can be freely used under Attribution-ShareAlike license, unless stated otherwise. Cite this article:
Wren Facts for Kids. Kiddle Encyclopedia.