Eusebio Francisco Kino (Italian: Eusebio Francesco Chini, Spanish: Eusebio Francisco Kino; 10 August 1645 – 15 March 1711) was an Italian Jesuit, missionary, geographer, explorer, cartographer and astronomer born in the Territory of the Bishopric of Trent, then part of the Holy Roman Empire of the German Nation. For the last 24 years of his life he worked in the region then known as the Pimería Alta, modern-day Sonora in Mexico and southern Arizona in the United States. He explored the region and worked with the indigenous Native American population, including primarily the Tohono O'Odham, Sobaipuri and other Upper Piman groups. He proved that the Baja California Peninsula is not an island by leading an overland expedition there. By the time of his death he had established 24 missions and visitas (country chapels or visiting stations).

Kino was born Eusebio Chini (the spelling Kino was the version for use in Spanish-speaking domains) in the village of Segno, (now part of the town of Predaia), then in the sovereign Prince-bishopric of Trent, a part of the Holy Roman Empire. In 1665, after his recovery from an illness, as part of a vow fulfillment, he adopted Francesco as second name, for devotion to Saint Francis Xavier.

His parents were Franz Kühn and Margherita Luchi who belonged to the local noble families. The exact date of his birth is unknown but he was baptized on 10 August 1645 in the parish church, located in Taio. Kino was educated in Innsbruck, Austria, and after recuperating from a serious illness, he joined the Society of Jesus on 20 November 1665. From 1664-69, he received religious training as a member of the Society at Freiburg, Ingolstadt, and Landsberg, Bavaria. After completing a final stage of training in the Society, during which he taught mathematics in Ingolstadt, he received Holy Orders as a priest on 12 June 1677.

Although Kino wanted to go to the Orient, he was sent to New Spain. Due to travel delays while crossing Europe, he missed the ship on which he was to travel and had to wait a year for another ship. While waiting in Cádiz, Spain, he wrote some observations, done during late 1680 and early 1681, about his study of a comet (later known as Kirch's comet), which he published as the Exposición astronómica de el cometa. This publication was later the subject of a sonnet by the noted colonial nun and poet of New Spain, Sor (Sister) Juana Inés de la Cruz, O.S.H.

Kino's first assignment was to lead the Atondo expedition to the Baja California peninsula of Las Californias Province of New Spain. He established the Misión San Bruno in 1683. After a prolonged drought there in 1685, Kino and the Jesuit missionaries were forced to abandon the mission and return to the viceregal capital of Mexico City.

Missions in the Pimería Alta 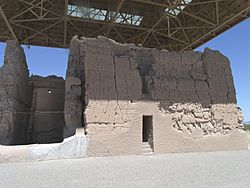 Written historic accounts of the Casa Grande in Coolidge, Arizona, begin with the journal entries of Padre Eusebio Francisco Kino when he visited the ruins in 1694.

Father Kino began his career in the Pimería Alta on the morning of 14 March 1687, 24 years and one day before his death on 15 March 1711. This was the morning he left Cucurpe, a town once considered the "Rim of Christendom."

Once Father Kino arrived in the Pimería Alta, at the request of the natives, he quickly established the first mission in a river valley in the mountains of Sonora. Subsequently, Kino traveled across northern Mexico, and to present day California and Arizona. He followed ancient trading routes established millennia prior by the natives. These trails were later expanded into roads. His many expeditions on horseback covered over 50,000 square miles (130,000 km2), during which he mapped an area 200 miles (320 km) long and 250 miles (400 km) wide. Kino's maps were the most accurate maps of the region for more than 150 years after his death. Many of today's geographical features including the Colorado River were first named by Kino. Kino was important in the economic growth of the area, working with the already agricultural indigenous native peoples and introducing them to European seed, fruits, herbs and grains. He also taught them to raise cattle, sheep and goats. Kino's initial mission herd of twenty cattle imported to Pimería Alta grew during his period to 70,000. Historian Herbert Bolton referred to Kino as Arizona's first rancher.

Interaction with the natives

In his travels in the Pimería Alta, Father Kino interacted with 16 different tribes. Some of these had land that bordered on the Pimería Alta, but there are many cases where tribal representatives crossed into the Piman lands to meet Kino. In other cases, Father Kino traveled into their lands to meet with them. The tribes Kino met with are the Cocopa, Eudeve, Hia C-ed O'odham (called Yumans by Kino), Kamia, Kavelchadon, Kiliwa, Maricopa, Mountain Pima, Opata, Quechan, Gila River Pima, Seri (Comcaac), Tohono O'odham, Sobaipuri, Western Apache, Yavapai, and the Yaqui (Yoeme). 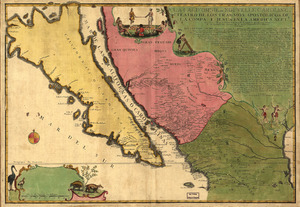 This map, which was hand-colored by cartographer Nicholas de Fer, was originally created by Kino in 1696. It is called California or New Carolina: Place of Apostolic Works of Society of Jesus at the Septentrional America.

Kino opposed the slavery and compulsory hard labor in the silver mines that the Spaniards forced on the native people. This also caused great controversy among his co-missionaries, many of whom acted according to the laws imposed by Spain on their territory. Kino was also a writer, authoring books on religion, astronomy and cartography. He built missions extending from the present day states of Mexican Sonora, northeast for 150 miles (240 km), into present-day Arizona, where the San Xavier del Bac mission, near Tucson, a popular National Historic Landmark, is still a functioning Franciscan parish church. Kino constructed nineteen rancherías (villages), which supplied cattle to new settlements.

Kino practiced other crafts and was reportedly an expert astronomer, mathematician and cartographer, who drew the first accurate maps of Pimería Alta, the Gulf of California, and Baja California. Father Kino enjoyed making model ships out of wood. His knowledge of maps and ships led him to believe that Mexican Indians could easily access California by sea, a view taken with skepticism by missionaries in Mexico City. When Kino proposed and began making a boat that would be pushed across the Sonoran Desert to the Mexican west coast, a controversy arose, as many of his co-missionaries began to question Kino's faculties. Kino had an unusual amount of wealth for his vocation, which he used primarily to fund his missionary activities. His contemporaries reported on his wealth with suspicion. 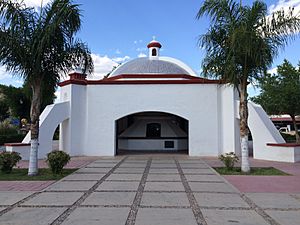 Kino remained among his missions until his death in 1711. He died from fever on 15 March 1711, aged 65, in what is present-day Magdalena de Kino, Sonora, Mexico. His skeletal remains can be viewed in his crypt which is a national monument of Mexico.

Kino has been honored both in Mexico and the United States, with various towns, streets, schools, monuments, and geographic features named after him. The copper silicate mineral Kinoite is named in his honor. In 1965, a statue of Kino was donated to the United States Capitol's National Statuary Hall collection, one of two statues representing Arizona. Another statue of him stands above Kino Parkway, a major thoroughfare in Tucson. An equestrian statue featuring Kino stands in Wesley Bolin Memorial Plaza across from the Arizona State Capitol in Phoenix. A time capsule is encapsuled in the base. Another equestrian statue also stands next to the Cathedral in the city of Hermosillo, Sonora, México. The towns of Bahía Kino, and Magdalena de Kino in Sonora and Ejido Padre Kino in Baja California are named in his honor. A park with a statue of Kino resides in the city of Nogales, AZ. The largest statue of Kino is located along the US-Mexico border in Tijuana, Baja California. Also a wine is named after him (Padre Kino), produced by Pernod Ricard Mexico in Hermosillo, Sonora. In 2009, Mexican and American Jesuit provinces and Catholic dioceses, the Jesuit Refugee Service, and the Missionary Sisters of the Eucharist, founded the Kino Border Initiative, a binational migrant service and advocacy organization in Nogales, Arizona and Nogales, Sonora named in his honor. A monument to Kino was erected in 2015 in the garden of Piazza Dante, just outside the historic center of Trento, Italy. In 1963, he was inducted into the Hall of Great Westerners of the National Cowboy & Western Heritage Museum.

After the first voyage of Christopher Columbus, the Catholic Church awarded to the Spanish Crown the lands of "New Spain." This grant was with the directive that the Crown would underwrite the efforts to convert the pagan inhabitants to Catholicism. The lands included the Caribbean, Mexico, and portions of what is now the Southwestern United States.

In its new lands, the Spanish Crown employed three major agencies to extend its borders and consolidate its colonial presence: the presidio (royal fort), pueblo (town), and the misión (mission). In addition, there were asistencias (sub-missions or contributing chapels) which were small-scale missions that regularly conducted Divine service on days of obligation, but lacked a resident priest. Visitas (visiting chapels or country chapels) also lacked a resident priest, and were often attended only sporadically. These different types of settlements were established such that each of the installations was no more than a long day's ride by horse or boat (or three days on foot) from one another. 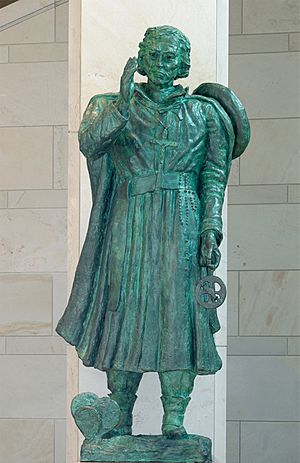 Each type of frontier station needed to be self-supporting, because supply lines (roads) were non-existent. There was no way to maintain a village from outside sources. To sustain a mission settlement, the Fathers needed either Spanish colonists or converted natives to cultivate crops and tend livestock in the volume needed to support a fair-sized Church establishment. Scarcity of imported materials and lack of skilled laborers compelled the Fathers to employ simple building materials and methods.

Although the Spanish hierarchy considered the missions temporary ventures, individual settlement development was not based simply on a priestly whim. The founding of a mission followed long-standing rules and procedures. The paperwork involved required months, sometimes years of correspondence, and demanded the attention of virtually every level of the Spanish bureaucracy.

Once empowered to erect a mission in a given area, the men assigned to it chose a specific site that featured a good water supply, plenty of wood for fires and building material, and ample fields for grazing herds and raising crops. The Fathers blessed the site, and with the aid of their military escort fashioned temporary shelters out of tree limbs roofed with thatch, reeds, or in Pimería Alta saguaro ribs or ocotillo branches topped with brush and mud. These simple huts would ultimately give way to the stone and adobe buildings that exist today.

The majority of structures, indeed whole villages, were oriented on a roughly east–west axis to take the best advantage of the sun's position for interior illumination; the exact alignment depended on the geographic features of the particular site. Directives from Spain clearly stated that villages were to be sited on the west side of any valley so that the sun would shine in the homes first thing in the morning, discouraging slothful behavior on the part of the inhabitants.

When founding a mission compound, first the spot for the church itself was selected, its position marked and then the remainder of the mission complex would be laid out. Workshops, kitchens, living quarters, storerooms, and other ancillary chambers were usually grouped in a quadrangle, inside which religious celebrations and other festive events could take place.

This listing of the sites founded by Kino is not complete. Also, since names have changed over time, there appears to be some duplication. They are:

All content from Kiddle encyclopedia articles (including the article images and facts) can be freely used under Attribution-ShareAlike license, unless stated otherwise. Cite this article:
Eusebio Kino Facts for Kids. Kiddle Encyclopedia.