Baja California is both the furthest north and furthest west state in Mexico.

The first people came to the peninsula at least 11,000 years ago. At that time two main native groups are thought to have been present on the peninsula. In the south were the Cochimí. In the north were several groups belonging to the Yuman language family, including the Kiliwa, Paipai, Kumeyaay, Cocopa, and Quechan. These peoples were diverse in their adaptations to the region. The Cochimí of the peninsula's Central Desert were generalized hunter-gatherers who moved frequently; however, the Cochimí on Cedros Island off the west coast had developed a strongly maritime economy. The Kiliwa, Paipai, and Kumeyaay in the better-watered northwest were also hunter-gatherers, but that region supported denser populations and a more sedentary lifestyle. The Cocopa and Quechan of northeastern Baja California practiced agriculture in the floodplain of the lower Colorado River.

Another group of people were the Guachimis, who came from the north and created much of the Sierra de Guadalupe cave paintings. Not much is known about them except that they lived in the area between 100 BC and the coming of the Europeans and created World Heritage rock art.

Europeans reached the present state of Baja California in 1539, when Francisco de Ulloa reconnoitered its east coast on the Gulf of California and explored the peninsula's west coast at least as far north as Cedros Island. Hernando de Alarcón returned to the east coast and ascended the lower Colorado River in 1540, and Juan Rodríguez Cabrillo (or João Rodrigues Cabrilho (Portuguese)) completed the reconnaissance of the west coast in 1542. Sebastián Vizcaíno again surveyed the west coast in 1602, but outside visitors during the following century were few.

The Jesuits founded a permanent mission colony on the peninsula at Loreto in 1697. During the following decades, they gradually extended their sway throughout the present state of Baja California Sur. In 1751–1753, the Croatian Jesuit mission-explorer Ferdinand Konščak made overland explorations northward into the state of Baja California. Jesuit missions were subsequently established among the Cochimí at Santa Gertrudis (1752), San Borja (1762), and Santa María (1767).

After the expulsion of the Jesuits in 1768, the short-lived Franciscan administration (1768–1773) resulted in one new mission at San Fernando Velicatá. More importantly, the 1769 expedition to settle Alta California under Gaspar de Portolà and Junípero Serra resulted in the first overland exploration of the northwestern portion of the state.

The Dominicans took over management of the Baja California missions from the Franciscans in 1773. They established a chain of new missions among the northern Cochimí and western Yumans, first on the coast and subsequently inland, extending from El Rosario (1774) to Descanso (1817), just south of Tijuana.

The colonial governors were: 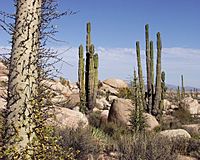 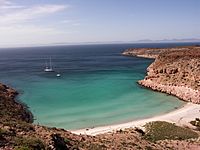 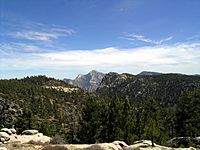 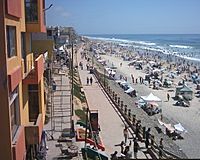 The beach at Tijuana 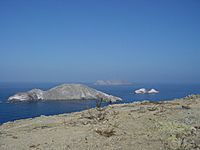 Coronado Islands, to the west of Tijuana 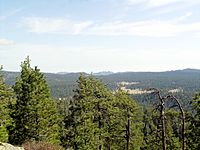 A meadow in the San Pedro Martir National Park

Baja California encompasses a territory which exhibits diverse geography for a relatively small area. The Peninsular ranges of the California cordillera run down the geographic center of the state. The most notable ranges of these mountains are the Sierra de Juarez and the Sierra de San Pedro Martir. These ranges are the location of forests reminiscent of Southern California's San Gabriel Mountains. Picacho del Diablo is the highest peak in the whole peninsula. Valleys between the mountain ranges are located within a climate zone that are suitable for agriculture. Such valleys included the Valle de Guadalupe and the Valle de Ojos Negros, areas that produce citrus fruits and grapes. The mineral-rich mountain range extends southwards to the Gulf of California, where the western slope becomes wider, forming the Llanos del Berrendo in the border with Baja California Sur. The mountain ranges located in the center and southern part of the state include the Sierra de La Asamblea, Sierra de Calamajué, Sierra de San Luis and the Sierra de San Borja.

Temperate winds from the Pacific Ocean and the cold California Current make the climate along the northwestern coast pleasant year-round. As a result of the state's location on the California current, rains from the north barely reach the peninsula, thus leaving southern areas drier. South of El Rosario River the state changes from a Mediterranean landscape to a desert one. This desert exhibits diversity in succulent flora species that flourish in part due to the coastal fog.

To the east, the Sonoran Desert enters the state from both California and Sonora. Some of the highest temperatures in Mexico are recorded in or nearby the Mexicali Valley. However, with irrigation from the Colorado River, this area has become truly an agricultural center. The Cerro Prieto geothermal province is near Mexicali as well (this area is geologically part of a large pull apart basin); producing about 80% of the electricity consumed in the state and enough more to export to California. Laguna Salada, a saline lake below sea level lying between the rugged Sierra de Juarez and the Sierra de los Cucapah, is also in the vicinity of Mexicali. The state government has recently been considering plans to revive Laguna Salada. The highest mountain in the Sierra de los Cucapah is the Cerro del Centinela or Mount Signal. The Cucapah are the primary indigenous people of that area and up into the Yuma, Arizona area.

There are numerous islands on the Pacific shore. Guadalupe Island is located in the extreme west of the state's boundaries and is the site of large colonies of sea lions. Cedros Island exists in the southwest of the state's maritime region. The Todos Santos Islands and Coronado Islands are located off the coast of Ensenada and Tijuana respectively. All of the islands in the Gulf of California, on the Baja California side, belong to the municipality of Mexicali.

Baja California obtains much of its water from the Colorado River. Historically the river drained into the Colorado River Delta which flowed into the Gulf of California, but due to large demands for water in the American Southwest, less water now reaches the Gulf. The Tijuana metropolitan area also relies on the Tijuana River as a source of water. Much of rural Baja California depends predominantly on wells and a few dams. Tijuana also purchases water from San Diego County's Otay Water District. Potable water is the largest natural resource issue of the state.

Baja California's climate varies from Mediterranean to arid. The Mediterranean climate is observed in the northwestern corner of the state where the summers are dry and mild and the winters cool and rainy. This climate is observed in areas from Tijuana to San Quintin and nearby interior valleys. The cold oceanic California Current often creates a low-level marine fog near the coast. The fog occurs along any part of the Pacific Coast of the state.

The change of altitude towards the Sierra de Baja California creates an alpine climate in this region. Summers are cool while winters can be cold with below freezing temperatures at night. It is common to see snow in the Sierra de Juarez and Sierra de San Pedro Martir (and in the valleys in between) from December to April. Due to orographic effects, precipitation is much higher in the mountains of northern Baja California than on the western coastal plain or eastern desert plain. Pine, cedar and fir forests are found in the mountains.

The east side of the mountains produce a rain shadow, creating an extremely arid environment. The Sonoran Desert region of Baja California experiences hot summers and nearly frostless mild winters. The Mexicali Valley (which is below sea level), experiences the highest temperatures in Mexico, that frequently surpass 47 °C (116.6 °F) in mid-summer, and have exceeded 50 °C (122 °F) on some occasions.

Further south along the Pacific coast, the Mediterranean climate transitions into a desert climate but it is milder and not as hot as along the gulf coast. Transition climates, from Mediterranean to Desert, can be found from San Quintin to El Rosario. Further inland and along the Gulf of California the vegetation is scarce and temperatures are very high during the summer months. The islands in the Gulf of California also belong to the desert climate. Some oases can be found in the desert in which few towns are located – for instance, Catavina, San Borja and Santa Gertrudis.

Common trees are the Jeffrey Pine, Sugar Pine and Pinon Pine. Understory species include Manzanita. Fauna include a variety of reptiles including the Western fence lizard, which is at the southern extent of its range. The name of the fish genus Bajacalifornia is derived from the Baja California Peninsula.

magnitude northwest trending strike-slip earthquake hit the Mexicali Valley, with its epicenter 26 km southwest of the city of Guadalupe Victoria, Baja California, Mexico. The main shock was felt as far as the Los Angeles, Las Vegas, Phoenix and Tucson metropolitan areas, and in Yuma. At least a half-dozen aftershocks with magnitudes between 5.0 and 5.4 were reported, including a 5.1-magnitude shaker at 4:14 am. that was centered near El Centro. As of 6:31 am PDT, 5 April 2010, two people were confirmed dead.

All content from Kiddle encyclopedia articles (including the article images and facts) can be freely used under Attribution-ShareAlike license, unless stated otherwise. Cite this article:
Baja California (state) Facts for Kids. Kiddle Encyclopedia.