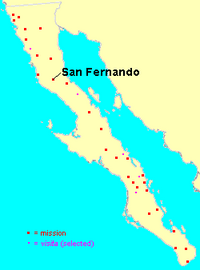 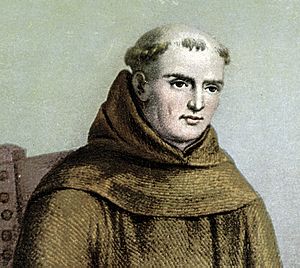 The site for the future mission was identified by the Jesuit missionary-explorer Wenceslaus Linck in 1766. After the Jesuits were replaced by the Franciscans in 1768, the latter were charged with extending Spanish control far to the north, into Alta California. Mission San Fernando, at the Cochimí settlement of Velicatá on the route north, was established by Junípero Serra during the early stages of the Portolá expedition, on May 14, 1769, the day of Pentecost. This would be Father Junipero Serra's first mission before moving north to Alta California.

In the 1770s, under the Franciscans and then after 1773 under their Dominican successors, the mission quickly reached its peak and went into decline as epidemics decimated the native population. A missionary was no longer permanently resident at the site after about 1818. A few ruined walls and stone foundations survive at the site as well as petroglyphs and some remains of pictograms. Just to the west of the mission ruins is possible find an aqueduct and a small dam.