Junipero Serra (November 24, 1713 – August 28, 1784) was a Franciscan friar most well known for founding the California missions. He was from Majorca in Spain. He was a teacher of philosophy in Spain and Mexico in the 1740s. In 1768, Serra became head of the missionaries in Baja California, and started the first and only Franciscan mission there. Soon after that, he started Mission San Diego de Alcala, the first Spanish mission in Alta California.

Serra started nine missions in Alta California. He was head of the California missions, and was based in Monterey. There is a statue of him in Statuary Hall from California. He was beatified by Pope John Paul II in 1988 and canonized in 2015 by Pope Francis.

Serra (born Miguel José Serra Ferrer was born in the village of Petra on the island of Majorca (Mallorca) off the Mediterranean coast of Spain. A few hours after birth, he was baptized in the village church. His baptismal name was Miquel Josep Serra. His father Antonio Nadal Serra and mother Margarita Rosa Ferrer were married in 1707.

By age seven, Miquel was working the fields with his parents, helping cultivate wheat and beans, and tending the cattle. But he showed a special interest in visiting the local Franciscan friary at the church of San Bernardino within a block of the Serra family house. Attending the friars' primary school at the church, Miquel learned reading, writing, mathematics, Latin, religion and liturgical song, especially Gregorian chant. Gifted with a good voice, he eagerly took to vocal music. 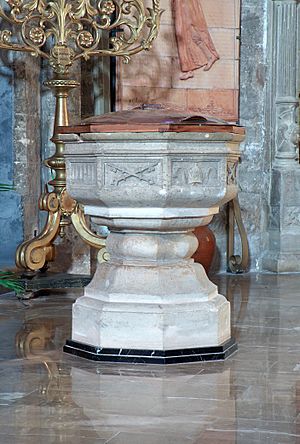 At this baptimal font Saint Junípero Serra was baptised, the founder of the first missions in California, among others San Francisco, San Diego, and Carmel

At age 16, Miquel's parents enrolled him in a Franciscan school in the capital city, Palma de Majorca, where he studied philosophy. A year later, he became a novice in the Franciscan order.

On September 14, 1730, Serra entered the Franciscan Order at Palma, specifically, the Alcantarine branch of the Friars Minor, a reform movement in the Order. Serra now embarked on his novitiate period, a year of preparation to become a full member of the Franciscan Order. He immersed himself in rigorous studies of logic, metaphysics, cosmology, and theology.

In 1737, Serra became a priest, and three years later earned an ecclesiastical license to teach philosophy at the Convento de San Francisco. Serra was considered intellectually brilliant by his peers. He received a doctorate in theology from the Lullian College in Palma de Majorca, where he also occupied the Duns Scotus chair of philosophy until he joined the missionary College of San Fernando de Mexico in 1749.

Serra had a singular purpose to save, in his mind, Native American souls. He believed that the death of an unconverted heathen was tragic, while the death of a baptized convert was a cause for joy. 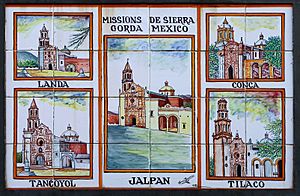 Painted tiles to commemorate the founding of the Missions in Sierra Gorda, Mexico by Junípero Serra

The missions were primarily designed to bring the Catholic faith to the native peoples, other aims were to provide a framework for organizing the natives into a productive workforce in support of new extensions of Spanish power, and to train them to take over ownership and management of the land. As head of the order in California, Serra not only dealt with church officials, but also with Spanish officials in Mexico City and with the local military officers who commanded the nearby garrison.

Converted Indians were segregated from Indians who had not yet embraced Christianity, lest there be a relapse. Discipline was strict, and the converts were not allowed to come and go at will. Indians who were baptized were required to live at the mission and conscripted into forced labor as plowmen, shepherds, cattle herders, blacksmiths, and carpenters on the mission. Disease, starvation, overwork, and torture decimated these tribes. The missions served economic and political purposes as well as religious ends. Economically, the missions produced all of the colony's cattle and grain, and by the 1780s were even producing surpluses sufficient to trade with Mexico for luxury goods.

In 1779, Franciscan missionaries under Serra's direction planted California's first sustained vineyard at Mission San Diego de Alcalá. Hence, he has been called the "Father of California Wine". The variety he planted, presumably descended from Spain, became known as the Mission grape and dominated California wine production until about 1880. 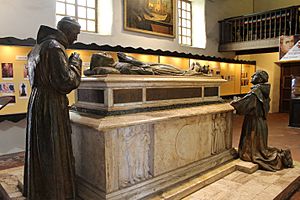 During the remaining three years of his life, he once more visited the missions from San Diego to San Francisco, traveling more than 600 miles in the process, to confirm all who had been baptized. He suffered intensely from a crippled leg, yet he would use no remedies. He confirmed 5,309 people, who were California Indian's converted during the fourteen years from 1770.

On August 28, 1784, at the age of 70, Junípero Serra died at Mission San Carlos Borromeo from tuberculosis. He is buried there under the sanctuary. Following Serra's death, leadership of the Franciscan missionary effort in Alta California passed to Fermín Lasuén. 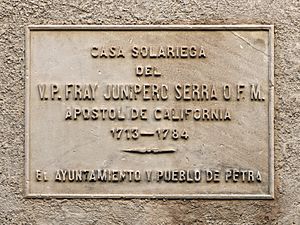 The Mission in Carmel, California, containing Serra's remains has continued as a place of public veneration. The burial location of Serra is southeast of the altar and is marked with an inscription in the floor of the sanctuary. Other relics are remnants of the wood from Serra's coffin on display next to the sanctuary, and personal items belonging to Serra on display in the mission museums. A bronze and marble sarcophagus depicting Serra's life was completed in 1924, but Serra's remains have never been transferred to that sarcophagus. 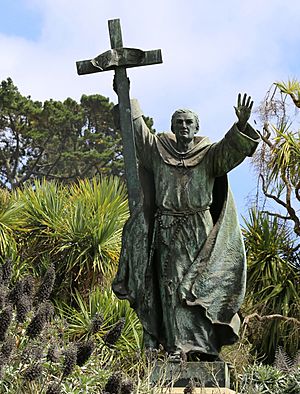 Junípero Serra was beatified by Pope John Paul II on September 25, 1988. The pope spoke before a crowd of 20,000 in a beatification ceremony for six; according to the pope's address in English, "He sowed the seeds of Christian faith amid the momentous changes wrought by the arrival of European settlers in the New World. It was a field of missionary endeavor that required patience, perseverance, and humility, as well as vision and courage."

Serra's feast day is celebrated on July 1 in the United States and on August 26 in Mexico. He is considered to be the patron saint of California, Hispanic Americans, and religious vocations. 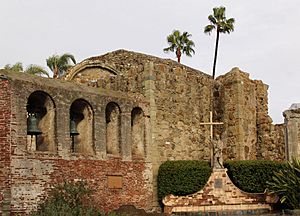 The chapel at Mission San Juan Capistrano, built in 1782, is thought to be the oldest standing building in California. Commonly referred to as "Father Serra's Church," it is the only remaining church in which Serra is known to have celebrated the rites of the Roman Catholic Church.

Many cities in California have streets, schools, and other features named after Serra. Examples include Junipero Serra Boulevard, a major boulevard in and south of San Francisco; Serramonte, a large 1960s residential neighborhood on the border of Daly City and Colma in the suburbs south of San Francisco; Serra Springs, a pair of springs in Los Angeles; Serra Mesa, a community in San Diego; Junipero Serra Peak, the highest mountain in the Santa Lucia Mountains; Junipero Serra Landfill and Serra Fault, a fault in San Mateo County. 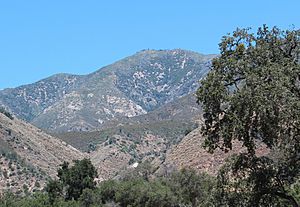 Both Spain and the United States have honored Serra with postage stamps.

In 2018, Spanish producer Pedro Alonso Pablos made an animation, medium-length film dedicated to the life and work of Fray Junípero called The call of Junipero, and although the Catholic Church had no intervention during the process of creating the film, the vision that the film offers coincides with that of the Church.

All content from Kiddle encyclopedia articles (including the article images and facts) can be freely used under Attribution-ShareAlike license, unless stated otherwise. Cite this article:
Junipero Serra Facts for Kids. Kiddle Encyclopedia.