Prince James Francis Edward Stuart or Stewart (June 10, 1688 – January 1, 1766) was a claimant of the thrones of Scotland and England (September 16, 1701 – January 1, 1766) who is more commonly referred to as The Old Pretender. His Jacobite supporters referred to him as James III of England and VIII of Scotland, and he was a key figure in the history of the British monarchy, although his personality was not such as to have made a great impact.

From the moment of his birth, on June 10, 1688, at St. James's Palace, the prince was the subject of controversy. He was the son of King James II of England and his Roman Catholic second wife, Mary of Modena. From his first marriage, the king had two adult daughters who had been brought up in the Protestant faith, and as long as there was a possibility of one of them succeeding him directly, the British people were prepared to tolerate his own Roman Catholic sympathies.

Within weeks of his birth, the child was sent to France for safety, and his father was fighting unsuccessfully to retain his crown. The prince was brought up in France, where, recognised by King Louis XIV of France as the rightful heir to the English and Scottish thrones, he became the focus for the Jacobite movement.

On his father's death in 1701, he was declared King, with the title of James III of England and VIII of Scotland and recognised as such by France; Spain; the Papal States and Modena. All of these states refused to recognise William III; Anne, George I or George II as the legitimate British sovereign.

Having been delayed in France by an attack of measles, James made an unsuccessful attempt to land at the Firth of Forth on March 23, 1708, but his French ships were driven back by the fleet of Admiral Sir George Byng. Had he renounced his Roman Catholic faith, he might have succeeded to the throne after the death of his half-sister Anne, but he refused to do so. As a result, in 1714, a German Protestant became King George I of Great Britain.

In 1714 the French forces were defeated, and King Louis XIV of France was forced to accept peace with England and her allies. He signed the Treaty of Utrecht in 1714 that, amongst other humiliating conditions, required him to expel James from France.

In the following year, the Jacobites instigated a rebellion in Scotland aimed at restoring "King James III and VIII" to the throne. In 1715, James finally set foot on Scottish soil, following the indecisive Battle of Sheriffmuir. Instead of carrying through the plans for a coronation at Scone, he returned to France. He was not welcomed back, because his supporter , Louis XIV, was dead and the government found him an embarrassment. The Pope offered him refuge in Rome, where he lived for the rest of his life. 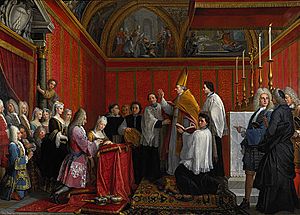 The marriage of Prince James and Princess Maria

Following James's failure, attention turned to his handsome and charismatic son, "Bonnie Prince Charlie", whose rebellion of 1745 came closer to success than his father's. With the failure of this second rebellion, however, the Stuart hopes of regaining the British throne were effectively destroyed. James died in Rome on January 1, 1766, and is buried in St. Peter's Basilica at the Vatican.

All content from Kiddle encyclopedia articles (including the article images and facts) can be freely used under Attribution-ShareAlike license, unless stated otherwise. Cite this article:
James Francis Edward Stuart Facts for Kids. Kiddle Encyclopedia.