Henry Benedict Thomas Edward Maria Clement Francis Xavier Stuart, Cardinal Duke of York (6 March 1725 – 13 July 1807) was a Roman Catholic cardinal, as well as the fourth and final Jacobite heir to publicly claim the thrones of Great Britain and Ireland. Unlike his father, James Francis Edward Stuart, and brother, Charles Edward Stuart, Henry made no effort to seize the thrones. After Charles's death in January 1788 the Papacy did not recognise Henry as the lawful ruler of Great Britain and Ireland, but referred to him as the Cardinal Duke of York.

He spent his life in the Papal States and had a long career in the clergy of the Roman Catholic Church, rising to become the Dean of the College of Cardinals and Cardinal-Bishop of Ostia and Velletri. At the time of his death he was (and still is) one of the longest-serving cardinals in the Church's history.

In his youth, Henry's father made him Duke of York (in the Jacobite Peerage), and it was by this title that he was best known. Upon the death of his brother in 1788, Henry became known by Jacobites as Henry IX, although publicly he referred to himself as Cardinal called Duke of York (to indicate that while he was called Duke of York, he actually held another title). 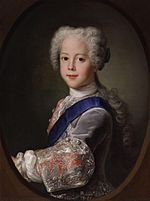 A young Henry Benedict, bearing a striking resemblance to his elder brother, The Young Pretender

Henry was born in exile at Rome on 6 March 1725 and baptized on the same day by Pope Benedict XIII, 37 years after his grandfather James II and VII lost the throne, and ten years after his father's failed attempt to regain it. His father was James Francis Edward Stuart, known to his opponents as "the Old Pretender". His mother was the Princess Maria Klementyna Sobieska, granddaughter of the Polish King, John III Sobieski.

Henry went to France in 1745 to help his brother, Prince Charles Edward Stuart ("Bonnie Prince Charlie", or "the Young Pretender") prepare the Jacobite campaign of that year. After its defeat, Henry Stuart returned to Italy. On 30 June 1747 Pope Benedict XIV conferred him with tonsure and created him Cardinal-Deacon of S. Maria in Portico in special consistory held on the 3 July 1747. On 27 August 1747 he was promoted to the four minor orders by the Pope. He received the subdiaconate on 18 August 1748 and diaconate on 25 August 1748. He was ordained priest on 1 September 1748 and consecrated titular Archbishop of Corinth on 2 October 1758.

He was made Cardinal Priest in 1748, and Cardinal-Bishop of Frascati on 13 July 1761. When he became the senior cardinal Dean of the Sacred College of Cardinals on 26 September 1803, he transferred to the See of Ostia and Velletri.

At one point Henry was very rich,

His revenues from the multitudinous ecclesiastical preferments he enjoyed were enormous. His income from abbeys and other pluralities in Flanders, Spain, Naples and France amounted to 40,000 Pounds in English money at the time. He also held sinecure benefices yielding revenues in Spanish America. He owned territory in Mexico, which contributed largely to his income.

At the time of the French Revolution, he lost the land and income he was given by the French king, and spent a lot of his money helping Pope Pius VI. This, in addition to the seizure of his Frascati property by the French, caused him to descend into poverty. The British Minister in Venice arranged for Henry to receive an annuity of £4,000 from King George III of Great Britain. Although the British government said this as an act of charity, Henry and the Jacobites called it to be a first installment on the money which was legally owed to him. (For many years the British government had promised to return the English dowry of his grandmother, Mary of Modena, but had never did.)

Henry returned to Frascati in 1803. In September of that year he became the Dean of the College of Cardinals and hence Cardinal Bishop of Ostia and Velletri, though he still lived in the episcopal palace at Frascati. He died there on 13 July 1807, aged 82.

Henry was the last claimant to the English throne to touch for the King's Evil. 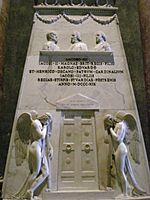 Monument to the Royal Stuarts, Rome

Under his will, which he signed as "Henry R", he was succeeded in all his claimed British rights by his friend and nearest blood-relative, Charles Emmanuel IV of Sardinia. But Charles never claimed or denied his Jacobite claims, nor have any of his successors to this day.

Contrary to popular belief, he did not leave the Crown Jewels to the Prince of Wales, afterwards George IV of the United Kingdom. All his property was entrusted to Monsignor Angelo Cesarini, for distribution. Cesarini sent the Prince of Wales several jewels from Henry's private collection. These included a "Lesser George" insignia (thought to have been worn by Charles I at his execution, and now at Windsor Castle) and a St Andrew's Cross (now at Edinburgh Castle), which is an insignia of the order of the Thistle, and also a ruby ring.

Henry Benedict, his brother, his father and his mother are buried in the crypt of St. Peter's Basilica in the Vatican. There is a monument to the Royal Stuarts designed by Antonio Canova in the basilica to their memory on one of the columns in the basilica proper. It was recently restored, paid for by Queen Elizabeth the Queen Mother.

All content from Kiddle encyclopedia articles (including the article images and facts) can be freely used under Attribution-ShareAlike license, unless stated otherwise. Cite this article:
Henry Benedict Stuart Facts for Kids. Kiddle Encyclopedia.