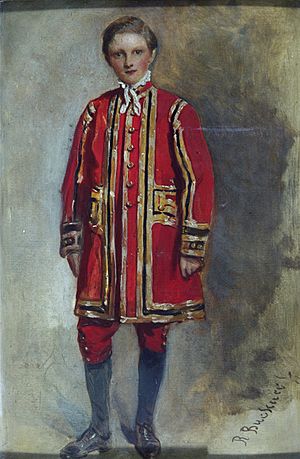 Portrait of a Boy Chorister of the Chapel Royal, c. 1873

The Chapel Royal is a department of the monarch's household in the United Kingdom.

Incorrectly, the term is also used for the choirs of these chapels. The correct name for these choirs is the Gentlemen of the Chapel. They are a group of priests and singers who sing church services for the British monarch (king or queen). They are helped by young boy singers called choristers or Children of the Chapel. It is an old tradition.

Today there are two consecrated buildings at St James’s Palace, near Buckingham Palace in London served by the Chapel Royal. These chapels do not belong to the diocese (group of churches in a district). That is why they are called “royal peculiars” (“peculiar” in this sense does not mean “strange” but “special”). Services are held every Sunday except during August and September. Members of the public are welcome to go to these services. This is the only time that the public can go into the royal chapels. The choir also sing at special services, including one held every year on 6 January to celebrate Epiphany when offerings of gold, frankincense and myrrh are made on behalf of the queen.

The Chapel Royal dates back to the late 13th century. At that time the priests and choir travelled with the king wherever he went.

In the 17th century the chapel had its own building in Whitehall, which burned down in 1698. Since 1702 it has been based in St. James's Palace.

In the 16th and 17th centuries the choir was the best choir in England. William Byrd and Thomas Tallis were both organists there during the reign of Elizabeth I. Boy choristers from choirs outside London were sometimes made to join the Children of the Chapel if they had beautiful voices. These boys also took part in plays at the king or queen’s court. Charles II liked musical instruments, so the choir were often joined by violins, lutes and viols.

Today the Choir rehearses twice weekly at St James's Palace. The choir consists of six Gentlemen-in-Ordinary who are professional singers, and ten boys who have scholarships to go to the City of London School where they are called Queen's Scholars.

The composer Sir Peter Maxwell Davies, who is Master of the Queen's Music, works closely with the Chapel Royal. He wants to compose a new carol for them every Christmas.

All content from Kiddle encyclopedia articles (including the article images and facts) can be freely used under Attribution-ShareAlike license, unless stated otherwise. Cite this article:
Chapel Royal Facts for Kids. Kiddle Encyclopedia.