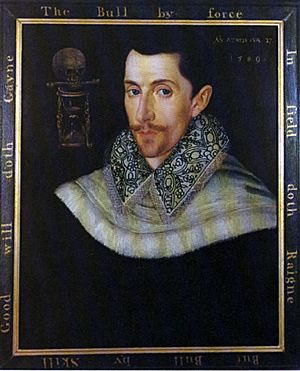 John Bull (born 1562 or 1563; died March 15, 1628) was an English composer, musician, and organ builder. He was famous for playing the harpsichord and organ. Most of his compositions were written for keyboard instruments. He became a Gentleman, and then organist, at the Chapel Royal.

Bull was one of the most famous composers of keyboard music of the early 17th century. He left many compositions for keyboard, some of which were collected in the Fitzwilliam Virginal Book. In addition to his keyboard compositions, he wrote verse anthems, canons and other works.

He is sometimes credited with the composition of God Save the Queen, the British national anthem.

He died in Antwerp and was buried on 15 March 1628 in the cemetery next to the cathedral.

All content from Kiddle encyclopedia articles (including the article images and facts) can be freely used under Attribution-ShareAlike license, unless stated otherwise. Cite this article:
John Bull (composer) Facts for Kids. Kiddle Encyclopedia.