Elizabeth of Bohemia facts for kids 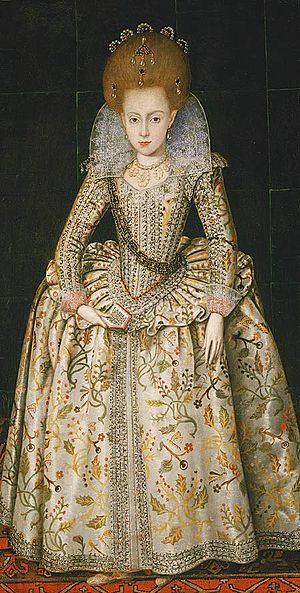 Elizabeth was born at Falkland Palace in Fife, Scotland. Her father gave her the name Elizabeth to make Queen Elizabeth I of England happy. The Queen had no children. James wanted her to choose him to be King of England when she died. She later agreed and James VI became King James I of England (as well as Wales and Ireland) in 1603. Elizabeth Stuart now had a higher status. This meant meant that more important men would want to marry her.

At this time, there was strong fighting between Catholics and Protestants in England. King James was a devout Protestant, and many Catholics did not like him because he persecuted many papists by levying taxes against them, banning Mass, and even executing people for being heretics and witches if they didn’t denounce Catholicism. In 1605, a group decided to try to blow up the English Parliament with gunpowder when King James was there. This is called The Gunpowder Plot. The group planned to kidnap Princess Elizabeth from Coombe Abbey, in Warwickshire. They wanted to make her the Queen. Because she was only nine years old, important Catholics would have the real power over her kingdoms. In the end, the group were found before they could kill King James.

On February 14 1613, Elizabeth married Frederick V. He was the Elector of the Palatinate. She moved to his court at Heidelberg. Frederick was the leader of an important group of Protestant princes, called the Evangelical Union. James wanted Elizabeth to marry someone from this group so he could have a stronger friendship with them.

In 1619, Frederick was asked to become King of Bohemia. He and Elizabeth moved to Prague. There was also strong fighting between different religious groups there. After only a few months of being King, Frederick had to leave the country. Because she was queen for such a short time, Elizabeth is sometimes called ‘The Winter Queen’. She was also called ‘Queen of Hearts’ because many people liked her.

Elizabeth and Frederick lived in exile in The Hague. They could not return to Bohemia. Frederick died in 1632 and Elizabeth lived in Holland for most of the rest of her life. After her brother’s son, Charles, became King of England and Scotland, she went to London to see him. She died there in 1662, when she was 65 years old.

She had thirteen children in total. Charles I Louis, became Elector of the Palatine in 1648. Her other children were: Frederick Henry von der Pfalz, Elisabeth of Bohemia, Princess Palatine, Prince Rupert of the Rhine, Louise Marie of the Palatinate, Prince Maurice von Simmern, Edward, Count Palatine of Simmern and Sophia of Hanover. After the 1701 Act of Settlement, Electress Sophia and her children were made heirs to the English and Scottish thrones. This means that all Kings and Queens of Great Britain after George I are Elizabeth’s descendants.

The Elizabeth River in Southeastern Virginia was named in honour of the princess. Cape Elizabeth a peninsula and, today, a town in the U.S. state of Maine was also named for her. John Smith explored and mapped New England. He gave names to places mainly based on the names used by Native Americans. When Smith showed his map to Charles I, he said that the king should feel free to change the "barbarous names" for "English" ones. The king made many such changes. Only four survive today. One of which is Cape Elizabeth.

All content from Kiddle encyclopedia articles (including the article images and facts) can be freely used under Attribution-ShareAlike license, unless stated otherwise. Cite this article:
Elizabeth of Bohemia Facts for Kids. Kiddle Encyclopedia.