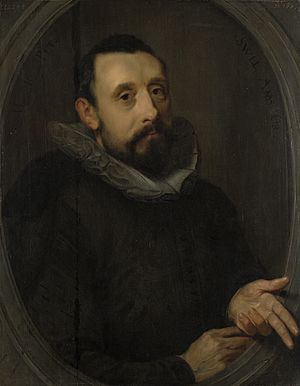 One of the two surviving portraits of Sweelinck, this one dates from 1606. It is attributed to Gerrit Pietersz Sweelink, the composer's brother

Jan Pieterszoon Sweelinck (born May 1562 in Deventer, Netherlands; died 16 October 1621) was a Dutch composer and organist. Sweelinck (pronounce: ZVAY-link) lived at the end of the Renaissance and beginning of the Baroque periods. He was one of the greatest organists and composers of his day. He was the organist at the Oude Kerk (“Old Church”) in Amsterdam for 44 years. Many musicians travelled a long way to Amsterdam to hear him improvise at the organ. He composed music for the organ and harpsichord as well as vocal music. His work as a teacher helped establish the north German organ tradition. 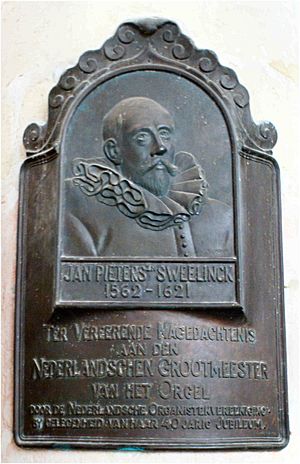 Sweelinck represents the highest development of the Dutch keyboard school, and showed the keyboard complexity and refinement before J.S. Bach. However, he was a skilled composer for voices as well, and composed more than 250 vocal works. Some of Sweelinck's innovations were of profound musical importance. It is also generally thought that many of Sweelinck's keyboard works were intended as studies for his pupils.

Sweelinck was a master improviser, and acquired the informal title of the "Orpheus of Amsterdam". More than 70 of his keyboard works have survived, and many of them may be similar to that which the residents of Amsterdam around 1600 were likely to have heard. In the course of his life, Sweelinck was involved with the musical form of three distinctly different traditions: Catholic, the Calvinist, and Lutheran, all of which are reflected in his work. Even his vocal music shows a striking rhythmic complexity and an unusual richness.

All content from Kiddle encyclopedia articles (including the article images and facts) can be freely used under Attribution-ShareAlike license, unless stated otherwise. Cite this article:
Jan Pieterszoon Sweelinck Facts for Kids. Kiddle Encyclopedia.