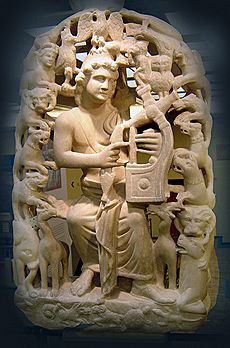 Orpheus with the lyre and surrounded by beasts (Byzantine & Christian Museum, Athens)

Orpheus is the god of music in Greek mythology. When he played his harp the world would sway to the music. He was the son of a Muse.

Orpheus was married to a dryad named Eurydice. While trying to get away from a satyr, she was bitten by a snake and went to Hades. Orpheus played sad music and the whole world cried with him. Orpheus decided to ride the ferry across the river Styx. He played his harp to make Cerberus fall asleep. He played his harp for Persephone. She said he could take Eurydice back to the upper world, if he didn't look back at Eurydice until they both got back up to the land of mortals. He did look back when he got to the upper world but his wife was not in the upper world yet so she went back to the realm of Hades forever. He was killed by Maenad.

All content from Kiddle encyclopedia articles (including the article images and facts) can be freely used under Attribution-ShareAlike license, unless stated otherwise. Cite this article:
Orpheus Facts for Kids. Kiddle Encyclopedia.