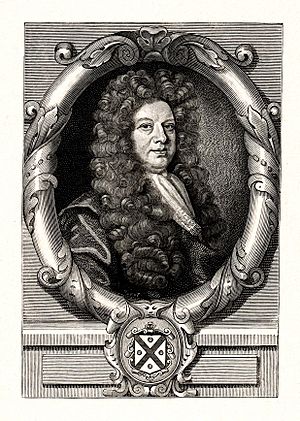 In 1676 Blow became one of three organists at Westminster Abbey. In 1677 he was given the title of “Doctor of Music”. In 1680 he seems to have resigned from his job as organist at Westminster Abbey so that his young pupil Henry Purcell could take his place. By 1685 he was one of the private musicians of James II. He composed a long anthem God spake sometime in visions for King James’s coronation.

In 1687 he became choirmaster at St Paul's Cathedral. The choir was just being reformed after the rebuilding of the cathedral following the Great Fire of London. In 1695 he became organist of St Margaret's, Westminster, and he also took his old job at Westminster Abbey again when Henry Purcell died.

In 1699 he became Composer to the Chapel Royal. This was the first time anyone had been given this title. However, he does not seem to have composed much after 1700.

Blow died on 1 October 1708 and was buried in the north aisle of Westminster Abbey.

All content from Kiddle encyclopedia articles (including the article images and facts) can be freely used under Attribution-ShareAlike license, unless stated otherwise. Cite this article:
John Blow Facts for Kids. Kiddle Encyclopedia.