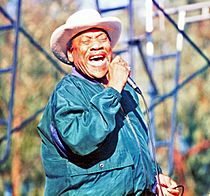 Robert Calvin "Bobby" Bland (January 27, 1930 – June 23, 2013), also known as Bobby "Blue" Bland, was an American singer of blues and soul. He was an original member of the Beale Streeters, and was sometimes referred to as the "Lion of the Blues". Along with such artists as Sam Cooke, Ray Charles, and Junior Parker, Bland developed a sound that mixed gospel with the blues and R&B.

Bland was an African-American who was born on January 27, 1930 in Rosemark, Tennessee. He was raised in Memphis, Tennessee. Bland died on June 23, 2013 in Germantown, Tennessee from an illness. He was 83 years old. After his death, his son told news media that Bland had recently discovered that musician James Cotton was his half-brother.

All content from Kiddle encyclopedia articles (including the article images and facts) can be freely used under Attribution-ShareAlike license, unless stated otherwise. Cite this article:
Bobby Bland Facts for Kids. Kiddle Encyclopedia.