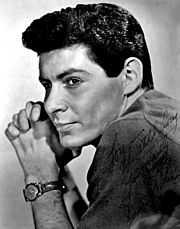 Fisher was born on August 10, 1928 in Philadelphia, Pennsylvania to a Russian-Jewish family. He studied at Thomas Junior High School, South Philadelphia High School, and at Simon Gratz High School. It was during high school many people discovered that Fisher had a talent for singing.

Fisher died on September 22, 2010 in Berkeley, California after going into surgery, aged 82. Fisher broke his hip thirteen days before. He had hearing and seeing problems. His remains were cremated and were later buried. He was buried at Cypress Lawn Memorial Park next to his wife Betty Lin.

All content from Kiddle encyclopedia articles (including the article images and facts) can be freely used under Attribution-ShareAlike license, unless stated otherwise. Cite this article:
Eddie Fisher Facts for Kids. Kiddle Encyclopedia.