The Palace Theatre is a Broadway theatre located at 1564 Broadway (at West 47th Street) in midtown Manhattan, New York City. From 1913 through about 1929, the Palace attained legendary status among vaudeville performers as the flagship of the Keith–Albee organization, and the most desired booking in the country. With 1,610 seats (as of 2018) spread over three levels, it is one of the largest theaters on Broadway, housing primarily large musicals and concert engagements. On September 16, 2018, following the run of SpongeBob SquarePants, the theater closed for an extensive renovation, and is expected to reopen in 2021.

Designed by Milwaukee architects Kirchoff & Rose, the 1,740-seat theatre was funded by Martin Beck, a vaudeville entrepreneur based in San Francisco, in an attempt to challenge Keith–Albee's east-coast monopoly. Albee in turn demanded that Beck turn over three-quarters ownership to use acts from the Keith circuit. Beck took the deal, and was in charge of the booking.

When the theatre finally opened on March 24, 1913, with headliner Ed Wynn, it was not an instant success and lost money for months.

Soon the Palace became the premiere venue of the Keith–Albee circuit. The theater owner Albee sometimes traded on the performers' desire for this goal by forcing acts to take a pay cut for the privilege. Even so, to "play the Palace" meant that an entertainer had reached the pinnacle of his vaudeville career. Performer Jack Haley wrote:

Only a vaudevillian who has trod its stage can really tell you about it ... only a performer can describe the anxieties, the joys, the anticipation, and the exultation of a week's engagement at the Palace. The walk through the iron gate on 47th Street through the courtyard to the stage door, was the cum laude walk to a show business diploma. A feeling of ecstasy came with the knowledge that this was the Palace, the epitome of the more than 15,000 vaudeville theaters in America, and the realization that you have been selected to play it. Of all the thousands upon thousands of vaudeville performers in the business, you are there. This was a dream fulfilled; this was the pinnacle of Variety success.

Simply to play the Palace assured an enhanced reputation and future bookings, but to play the coveted headline spot, usually billed seventh and next to the closing act, was a special distinction. Through the years of vaudeville's heyday, these headliners included: 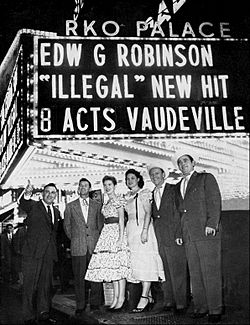 With the Great Depression came a rise in the popularity of film and radio, and vaudeville saw a steep decline. The transformation of all of Keith–Albee–Orpheum's vaudeville houses into movie houses through a merger with RCA and the Film Booking Office at the hands of Joseph P. Kennedy in 1929, was a major blow but did allow many to see their favorite radio performers of the day on the Palace stage.

In 1929, the two-a-day Palace shows increased to three. By 1932, the Palace moved to four shows a day and lowered its admission price. In November of that year, it was rebranded the "RKO Palace" and converted to a cinema. Appearing on the closing bill when the venue ended its stage policy were Nick Lucas and Hal Le Roy. There was a brief return to a live revue format in 1936, when Broadway producer Nils Granlund staged a series of variety shows beginning with "Broadway Heat Wave" featuring female orchestra leader Rita Rio. Finally in 1957, the Palace, succumbed to the popularity of television and ceased stage presentations, with its films beginning with James Cagney's Man of a Thousand Faces.

Beginning in 1949 under Sol Schwartz, the refurbished RKO Palace tried to single-handedly revive vaudeville, with a slate of eight acts before a feature film. It attracted acts like Frank Sinatra, Jerry Lewis, Danny Kaye, Lauritz Melchior, Betty Hutton, and Harry Belafonte. Judy Garland staged a record-breaking 19-week comeback at the venue in October 1951. But while the shows were successful, they did not lead to a revival of the format. Judy Garland returned for a successful run in 1956, and also a notable engagement in the summer of 1967, which was recorded for a live album, Judy Garland at Home at the Palace: Opening Night.

The RKO Picture Citizen Kane had its world premiere at the theatre on May 1, 1941 and The Diary of Anne Frank premiered March 18, 1959. 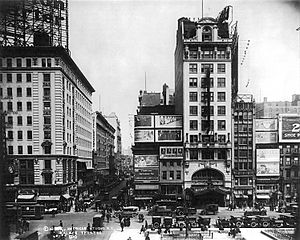 In 1965, the Nederlander Organization purchased the Palace from RKO Theatres. On January 29, 1966, the Palace reopened as a playhouse with the original production of the musical Sweet Charity, although for a period of time it showed films and presented concert performances by Judy Garland, Bette Midler, Liza Minnelli, Josephine Baker, Eddie Fisher, Shirley MacLaine, Diana Ross and Vikki Carr between theatrical engagements.

In the late 1980s, a towering hotel was built above the theater, supported by two super-columns located behind the original auditorium structure. Today the theater façade is almost entirely hidden behind a wall of enormous billboards. Only the marquee is visible. The interior was renovated in early 2014 prior to the opening of Holler If Ya Hear Me. In 2015, The Nederlander Organization and Maefield Development announced another $2 billion renovation plan which would include a new lobby and entrance on 47th Street as well as dressing rooms and other patron amenities. The theatre would be raised 29 feet (8.8 m) and the area occupied by the current lobby would be filled by retail space that would extend three additional levels below ground. The New York City Landmarks Preservation Commission approved the plan on November 24; however, many preservationists expressed concern over the idea. The City Council approved the plan on June 28, 2018.

The theatre was the original home to the long-running musicals La Cage aux Folles (1983−1987) and Beauty and the Beast, which opened in 1994 and ran over five years before moving to another theatre. Another notable tenant was Aida, which ran for over four years, from 2000 through 2004, and 1,852 performances and won four Tony Awards. The theatre also housed Legally Blonde: The Musical, a stage adaptation of the 2001 film, which played its final performance on October 19, 2008. A revival of West Side Story opened on March 19, 2009 and closed on January 2, 2011.

More recently, the theatre was home to the musical Priscilla, Queen of the Desert (2011–2012) and to the Broadway revival of Annie, (2012–2014). An American in Paris, a new musical stage adaptation of the 1951 MGM film, opened April 12, 2015 for an 18-month run. On November 25, 2016 The Illusionists: Turn of the Century opened for a limited engagement through January 1, 2017. The revival of Sunset Boulevard played a five-month limited engagement from February 2, 2017 through June 25, 2017, starring Glenn Close. The next show at the Palace was SpongeBob SquarePants, a musical adaptation of the children's television series. It began previews on November 6, 2017 and ran from December 4, 2017 to September 16, 2018. SpongeBob was the last show to play at the theater prior to the long-planned renovation. The reconstruction is estimated to keep the Palace closed until 2021. As part of the construction of TSX Broadway, a 600-foot (180 m) hotel and retail structure, the Palace Theatre would be raised 30 feet (9.1 m) using jacks.

The ghost of acrobat Louis Bossalina is said to haunt the theatre. According to various versions of the story, Bossalina "fell to his death in the 1950s" and that "Stagehands say that when the theater is empty, the ghost of Bossalina can be seen swinging from the rafters. He lets out a blood-curdling scream, then re-enacts his nose dive." However, in reality Bossalina, who was a member of the acrobatic act the Four Casting Pearls, was injured, but not fatally, when he fell 18 feet during a performance on August 28, 1935, before 800 theatregoers. Bossalina's act was not a trapeze but rather fixed towers in which the acrobats are "cast from one to the other." Comedian Pat Henning started his act in front of a curtain that was pulled right after the accident. Bossalina (who was incorrectly identified as "Borsalino" in the New York Times) died in 1963 in Reading, Pennsylvania at the age of 61.

All content from Kiddle encyclopedia articles (including the article images and facts) can be freely used under Attribution-ShareAlike license, unless stated otherwise. Cite this article:
Palace Theatre (New York City) Facts for Kids. Kiddle Encyclopedia.