Jerry Lewis (born Joseph Levitch, March 16, 1926 – August 20, 2017) was an American comedian, actor, singer, humanitarian, film director, film producer, screenwriter and author. He was known for his slapstick humor in film, television, stage and radio and was nicknamed the "King of Comedy". Lewis was one-half of the hit popular comedy duo Martin and Lewis with singer Dean Martin from 1946 to 1956.

After the team split, he became a director and solo star in motion pictures, made appearances in nightclubs, on television shows, in concerts and musicals and sang in music albums and recordings. Outside of his career, Lewis supported fundraising for muscular dystrophy research, serving for 60 years as spokesman for and national chairman of the Muscular Dystrophy Association and had also hosted and emceed the live Labor Day weekend broadcast of The Jerry Lewis MDA Labor Day Telethon for 44 years.

One of the most successful performers in show business, with worldwide box office receipts of his films in excess of $800 million, Lewis received global acclaim for his unique ability and style with both comedy and drama. As part of Martin and Lewis and as a solo actor, he was voted Hollywood’s top box-office from 1951 to 1965, in later years as the sole comedian. 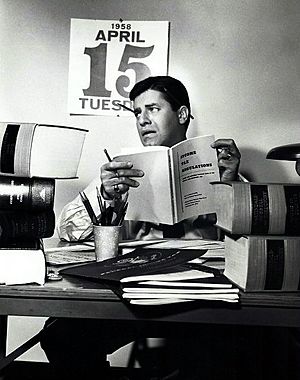 Lewis was born in Newark, New Jersey, he started performing at age five and would often perform alongside his parents in the Catskill Mountains in New York. He was a "character" even in his teenage years, pulling pranks in his neighborhood including sneaking into kitchens to steal fried chicken and pies. He dropped out of Irvington High School in the tenth grade. During World War II, he was rejected for military service because of a heart murmur.

Lewis first became famous as part of Martin & Lewis, working with singer Dean Martin. They worked together for ten years. They appeared on stage, radio and television, and in movies. The Martin and Lewis films were reliable financial successes for Paramount, and hugely popular with audiences. 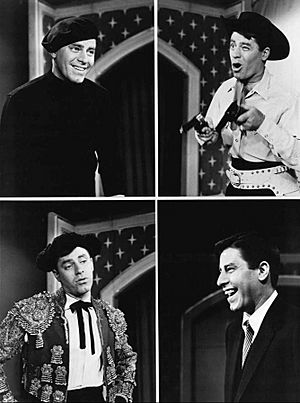 The partnership ended with their final nightclub act on July 24, 1956 (the team’s 10th anniversary of their debut as a duo). Both Martin and Lewis went on to highly successful solo careers, and neither would comment on the split nor consider a reunion. However, they would occasionally be seen at the same public events.

Lewis directed of many of his movies. He was the first director to use video cameras with movie cameras, to help with filming scenes. Film takes time to process, but videotape can be played back right away, saving time and work if a scene needs to be redone. Other directors soon started using his technique, and it is still used today.

During the 1970s, Lewis' movies became less popular. He moved away from acting and directing. In the 1990s, he returned to performing onstage. He continued to perform during the 2000s. 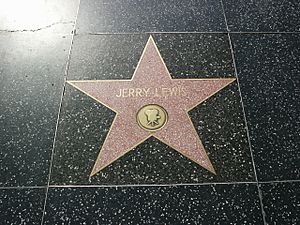 Widely known as a comic genius, Lewis influenced generations of comedians, comedy writers, performers and filmmakers. Often regarded as the bridge from Vaudeville to modern comedy. Jerry Lewis was the most profoundly creative comedian of his generation and arguably one of the two or three most influential comedians born anywhere in this century.

Lewis’ comedy style was physically uninhibited and expressive. He was known especially for his distinctive voice, facial expressions and physical stunts. His improvisations and ad-libbing, especially in nightclubs and early television, were revolutionary among performers. He had a raw, edgy energy that would distinguish him within the comedy landscape.

All content from Kiddle encyclopedia articles (including the article images and facts) can be freely used under Attribution-ShareAlike license, unless stated otherwise. Cite this article:
Jerry Lewis Facts for Kids. Kiddle Encyclopedia.