James Henry Cotton (July 1, 1935 – March 16, 2017) was an American blues harmonica player, singer and songwriter, who performed and recorded with many of the great blues artists of his time and with his own band. He played drums early in his career but is famous for his harmonica playing. 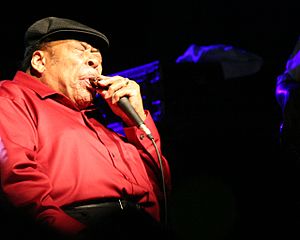 Cotton first began playing the blues harp in Williamson's band, called Howlin Wolf's. After one gig, Sonny Boy quit the band to live with his wife in Milwaukee. He left the band in Cotton's hands. Cotton said, ""He just gave it to me. But I couldn't hold it together 'cause I was too young and crazy in those days an' everybody in the band was grown men, so much older than me."

Cotton started working with the Muddy Waters Band in 1955. He performed songs like "I Got My Mojo Working" and "She's Nineteen Years Old". After leaving Muddy's band in 1966, Cotton toured with Janis Joplin. Alone, Cotton wrote classic songs like "Cotton Crop Blues", "Rocket 88" and "Hold Me In Your Arms". He formed the James Cotton Blues Band in 1967. They performed all of Cotton's classics and more.

Cotton played harmonica on Muddy Water's Grammy Award winning 1977 album Hard Again. James Cotton's band would also get nominated for two Grammy Awards. The first one was for his 1984 release, Live From Chicago: Mr. Superharp Himself!. His second for Take Me Back. 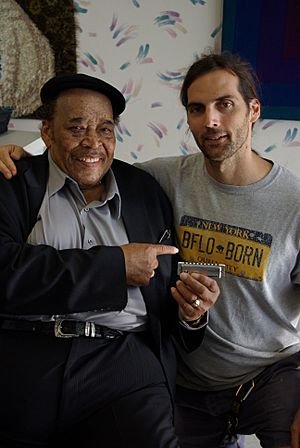 Cotton had worked with many prominent artists, including:

All content from Kiddle encyclopedia articles (including the article images and facts) can be freely used under Attribution-ShareAlike license, unless stated otherwise. Cite this article:
James Cotton Facts for Kids. Kiddle Encyclopedia.