Tunica is a town in and the county seat of Tunica County, Mississippi, United States, near the Mississippi River. Until the early 1990s when casino gambling was introduced in the area, Tunica had been one of the most impoverished places in the United States. Despite this economic improvement, Tunica's population continues to decline from its peak in 1970.

Tunica is the fourth community to serve as county seat of Tunica County, Its fortunes have improved since development of a gambling resort area nearby. While population growth has occurred mostly outside Tunica, the major casinos employ numerous locals. They attract visitors from nearby Memphis, Tennessee, West Memphis, Arkansas and all over the Southeastern United States.

According to the United States Census Bureau, the town has a total area of 0.7 square miles (1.8 km2), all land. 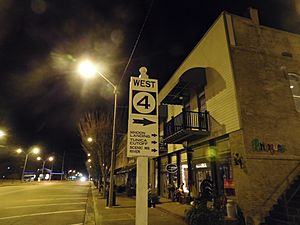 Casino gambling's effect on the local economy has spurred population growth in unincorporated parts of the county outside Tunica proper. Since 1990, the town's name has been popularly associated with several casinos located near the Mississippi River. However, the current group of casinos is located in the community of Tunica Resorts, 10 miles north of the town of Tunica, and extending to the DeSoto County line.

Tunica Resorts was originally named "Robinsonville", but the name was changed in 2005 to eliminate confusion over the location of the casinos, which have always used the name "Tunica" as an identifier. The success of these gaming houses in northern Tunica County came at the expense of the area's first group of casinos in the early 1990s, located just northwest of Tunica proper, in an area known as Mhoon Landing. This now comprises the current census-designated place of North Tunica. These casinos were closed or moved as larger resorts opened closer to Memphis to attract its larger residential base.

Unlike the area including casinos along Mississippi's Gulf Coast region, Tunica was not in the path of Hurricane Katrina. As a result, some of the regular Gulf Coast customer traffic from casinos drifted northward to Tunica County while repairs and reconstruction were underway in the Gulf Coast locations.

Though the casinos lie outside the town limits, the benefits of tax revenue generated have also aided the town. Major improvements to the public school system and downtown district are among the most visible aspects. Long-term effects include major highway improvements on U.S. Route 61 and a much-discussed potential expansion of Tunica Municipal Airport.

As of 2007, some Tunica Resorts residents are trying to incorporate their community as a separate town government, rather than operate under the jurisdiction of Tunica County or be annexed into the town of Tunica. If Tunica Resorts incorporates, the new town government would directly benefit from casino tax revenue, enabling construction of municipal government offices. Depending on population and revenue growth, fire and police stations, libraries and other public infrastructure could be other likely additions. Potential effects on the existing town of Tunica are unclear.

Tunica Academy is located in an unincorporated area in Tunica County, near Tunica.

Tunica Municipal Airport has had airline service intermittently with aircraft such as Boeing 727 jets of Pan Am Clipper Connection and Boeing 737 jets of Air Tran offering commercial services. The closest airport with continuous airline service is Memphis International Airport in Memphis, Tennessee, which is about 30 minutes away by car.

All content from Kiddle encyclopedia articles (including the article images and facts) can be freely used under Attribution-ShareAlike license, unless stated otherwise. Cite this article:
Tunica, Mississippi Facts for Kids. Kiddle Encyclopedia.