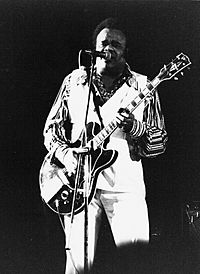 Freddie King (September 3, 1934 – December 28, 1976) was an American blues guitarist and singer. He recorded many hits for Federal Records in the early 1960s. He was added into the Rock and Roll Hall of Fame in 2012. King was born in Gilmer, Texas.

King based his guitar style on Texas blues and Chicago blues. His best-known recordings include the early instrumentals "Hide Away" (1961), "San-Ho-Zay," (1961) and "The Stumble" (1962). He later became involved with more rhythm and blues- and rock-oriented producers.

All content from Kiddle encyclopedia articles (including the article images and facts) can be freely used under Attribution-ShareAlike license, unless stated otherwise. Cite this article:
Freddie King Facts for Kids. Kiddle Encyclopedia.