Georgia in the American Civil War facts for kids 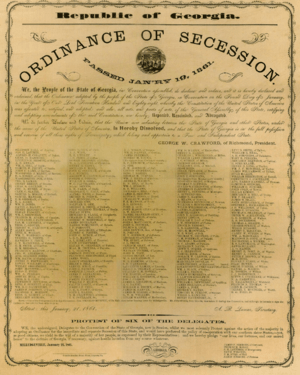 Facsimile of the 1861 Ordinance of Secession signed by 293 delegates to the Georgia Secession Convention at the statehouse in Milledgeville, Georgia January 21, 1861

Georgia was one of the original seven slave states that formed the Confederate States of America in February 1861, triggering the U.S. Civil War. The state governor, Democrat Joseph E. Brown, wanted locally raised troops to be used only for the defence of Georgia, in defiance of Confederate president Jefferson Davis, who wanted to deploy them on other battlefronts. When the Union blockade prevented Georgia from exporting its plentiful cotton in exchange for key imports, Brown ordered farmers to grow food instead, but the breakdown of transport systems led to desperate shortages.

There was not much fighting in Georgia until September 1863, when Confederates under Braxton Bragg defeated William S. Rosecrans at Chickamauga Creek. In May 1864, William T. Sherman started pursuing the Confederates towards Atlanta, which he captured in September, in advance of his March to the Sea. This six-week campaign destroyed much of the civilian infrastructure of Georgia, decisively shortening the war. When news of the march reached Robert E. Lee's army in Virginia, whole Georgian regiments deserted, feeling they were needed at home. The Battle of Columbus, fought on the Georgia-Alabama border on April 16, 1865, is reckoned by some criteria to have been the last battle of the war.

Georgia was relatively free from warfare until late 1863. A total of nearly 550 battles and skirmishes occurred within the state, with the vast majority in the last two years of the conflict. The first major battle in Georgia was a Confederate victory at the Battle of Chickamauga in 1863—it was the last major Confederate victory in the west. In 1864, William T. Sherman's armies invaded Georgia as part of the Atlanta Campaign. Confederate general Joseph E. Johnston fought a series of delaying battles, the largest being the Battle of Kennesaw Mountain, as he tried to delay as long as possible by retreating toward Atlanta. Johnston's replacement, Gen. John Bell Hood attempted several unsuccessful counterattacks at the Battle of Peachtree Creek and the Battle of Atlanta, but Sherman captured the city on September 2, 1864.

After burning Atlanta to the ground, Sherman embarked on his March to the Sea on November 15, en route to Milledgeville, the state capital, which he reached on November 23, and the port city of Savannah, which he entered on December 22. A swath of land about 60 miles across was destroyed in this campaign, less than 10% of the state. Once Sherman's army passed through, the Confederates regained control. The March is a major part of the state's folk history, and is the setting for Margaret Mitchell's 1936 novel Gone with the Wind and the subsequent 1939 film.

In December 1864, Sherman captured Savannah before leaving Georgia in January 1865 to begin his Carolinas Campaign. However, there were still several small fights in Georgia after his departure. One of the last land battles of the Civil War, the Battle of Columbus, was fought on the Georgia-Alabama border.

Re-entry to the Union

The war left parts of Georgia devastated and the state's economy in shambles. Reconstruction activities started immediately after the hostilities ceased, but lingering effects of the bitter strife stayed until well into the 20th century. Georgia did not re-enter the Union until June 15, 1870, more than two years after South Carolina was readmitted. Georgia was the last of the Confederate States to re-enter the Union.

Today, many of Georgia's Civil War battlefields, particularly those around Atlanta, have been lost to modern urban development. However, a number of sites have been well preserved, including Chickamauga and Chattanooga National Military Park and Kennesaw Mountain National Battlefield Park. Other Civil War related sites include Stone Mountain, Fort Pulaski, and the Atlanta Cyclorama, as well as Confederate Memorial Park.

A number of antebellum mansions and plantations in Georgia are preserved and open to the public, particularly around Atlanta and Savannah.

Portions of the Civil War-era Western & Atlantic Railroad have historical markers commemorating events during the war, including several sites associated with the Andrews Raid.

All content from Kiddle encyclopedia articles (including the article images and facts) can be freely used under Attribution-ShareAlike license, unless stated otherwise. Cite this article:
Georgia in the American Civil War Facts for Kids. Kiddle Encyclopedia.