Butts County is a county located in the central part of the U.S. state of Georgia. As of the 2010 census, the population was 23,655. The county seat is Jackson. The county was created on December 24, 1825.

In 2010, the center of population of Georgia was located in the northeastern portion of the county.

Butts County has one radio station: WJGA FM 92.1 and one local newspaper, the Jackson Progress-Argus.

Butts County was formed on December 24, 1825 as the sixty-fourth county in Georgia from portions of Henry County and Monroe County. It was named by the Georgia General Assembly in honor of Samuel Butts, an officer who was killed in the Creek War in 1814. A year later, Jackson was created as the first city in the new county and became the county seat. Other towns followed, including Indian Springs (1837); Flovilla (1883); Jenkinsburg (1889); and Pepperton (1897). Indian Springs later disincorporated and Pepperton was merged with Jackson in 1966, leaving just three incorporated cities in Butts County. In recent years, Indian Springs has again become a tourist destination including many historic sites, shops, eating establishment and the famous Indian Springs Hotel as its centerpiece.

Much of Butts County and its cities were destroyed by the army of General William T. Sherman in its infamous March to the Sea during the American Civil War. Butts County struggled for decades afterwards to become economically stable again. The arrival of the first railroad train on May 5, 1882 started the resurgence and growth followed. In 1898, caught up in the post-reconstruction fervor that had infected most Georgia counties, Butts County erected a monumental courthouse as a sign of its new prosperity. This building is still in use as a courthouse to this day. The construction of the Lloyd Shoals dam in 1910 created Jackson Lake, a prime recreational lake located primarily in Butts County.

Progress milestones in Butts County include the first telephones in 1884; first waterworks in 1905; electric lights on February 19, 1907; and traffic lights in 1926.

In 2007, Butts County, along with the city of Flovilla were both designated as Georgia Signature Communities by the Georgia Department of Community Affairs. This prestigious designation was given to a total of 12 communities in Georgia that year. 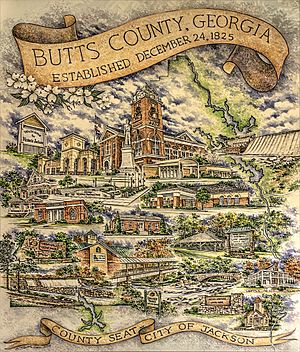 1821 - The Indian Springs Hotel, now a museum, was the site of the signing of the treaty that ceded all Native American land in Butts County to the government. Today it is operated as a museum and had been carefully preserved by generations of historical society members. Indian Springs State Park surrounds the hotel and is the oldest State Park in the nation.

Jackson Lake, created by the damming of the Ocmulgee River in 1911, is now a recreational venue that attracts many visitors from all over middle and North Georgia.

1929 - Fresh Air Barbecue, the oldest functioning barbecue restaurant still in its original location in Georgia, was awarded the title of Georgia's Best Barbecue in 1984.

All content from Kiddle encyclopedia articles (including the article images and facts) can be freely used under Attribution-ShareAlike license, unless stated otherwise. Cite this article:
Butts County, Georgia Facts for Kids. Kiddle Encyclopedia.