Ringgold is a city in and the county seat of Catoosa County, Georgia, United States. Its population was 3,580 at the 2010 census. It is part of the Chattanooga, Tennessee–GA Metropolitan Statistical Area.

Ringgold was founded in 1846 and incorporated as a city in 1847. It was named after Samuel Ringgold, a hero of the Battle of Palo Alto in the Mexican–American War.

Ringgold is where the The General locomotive stopped during the Great Locomotive Chase on April 12, 1862. Ringgold is also home to the historic Ringgold Depot, which still contains bullet marks from the Civil War.

On March 14, 2002, a sudden heavy fog played havoc with morning traffic and contributed to one of the worst traffic pileups in history; 125 vehicles crashed on Interstate 75 North and four people died. 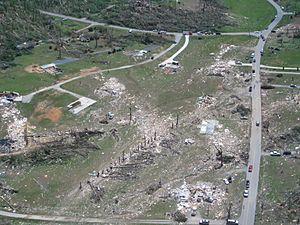 On April 27, 2011, an EF4 tornado touched down in Ringgold and Catoosa County, leaving a path of destruction. The tornado killed twenty people along a 48 miles (77 km) path across Catoosa County and over the state line in Hamilton and Bradley counties. Eight died in Ringgold, including an entire family of four, and at least thirty others were injured. Many homes, businesses, and schools were damaged or destroyed. 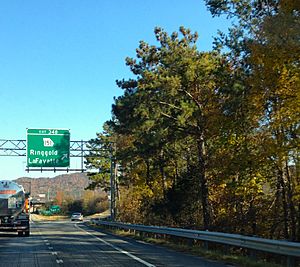 Ringgold is situated in the Valley and Ridge geologic province of the Appalachian Mountains, characterized by long north-northeasterly trending ridges separated by valleys. The topography was formed by the erosion of alternating layers of hard and soft sedimentary rock that were folded and faulted during the building of the Appalachians. Taylor Ridge runs through Ringgold; a gap in the ridge is located just east of the city center, with the part of the ridge running to the south called Taylors Ridge and to the north called White Oak Mountain. South Chickamauga Creek, a tributary of the Tennessee River, runs through Ringgold.

The climate in this area is characterized by relatively high temperatures and evenly distributed precipitation throughout the year. According to the Köppen Climate Classification system, Ringgold has a humid subtropical climate, abbreviated "Cfa" on climate maps.

The Catoosa County Public Schools educates students from pre-school to grade twelve. In the district, there are ten elementary schools, three middle schools, and three high schools. The district has 606 full-time teachers and over 9,809 students.

All content from Kiddle encyclopedia articles (including the article images and facts) can be freely used under Attribution-ShareAlike license, unless stated otherwise. Cite this article:
Ringgold, Georgia Facts for Kids. Kiddle Encyclopedia.