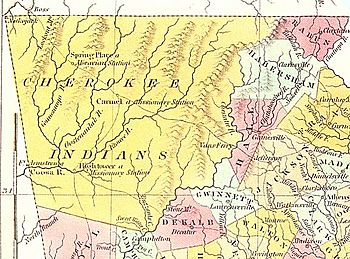 The Treaty of New Echota (7 Stat. 488) was a treaty signed on December 29, 1835, in New Echota, Georgia by officials of the United States government and representatives of a minority Cherokee faction, the Treaty Party.

The treaty of New Echota essentially made the Indians move out of the southeast United States and into Indian Territory. This move was called the Trail of Tears.

All content from Kiddle encyclopedia articles (including the article images and facts) can be freely used under Attribution-ShareAlike license, unless stated otherwise. Cite this article:
Treaty of New Echota Facts for Kids. Kiddle Encyclopedia.