Ball Ground is a city in Cherokee County, Georgia, United States. Settled many years before being incorporated on January 1, 1882, the 2010 census shows the city had a population of 1,433, nearly doubling between 2000 and 2010.

Some records indicate Ball Ground was originally named Battle Ground on early maps. The town is located near fields that the Cherokee people used to play stick ball, a rough game similar to modern lacrosse. The large fields and abundance of freshwater streams made Ball Ground an alluring place for the large gatherings of Native Americans because the ball game required large, flat fields, and there were plenty of natural resources to support large groups of people. When settlers entered the area, the streams and fields attracted farmers, who dammed up creeks to create numerous man-made ponds and lakes. Most ponds and lakes still exist today, and Ball Ground still has a predominantly agriculture-based economy.

The community was incorporated on January 1, 1882, the same year that the railroad came through. Before that date, the community consisted of two country stores and a few dwellings. After the railroad's arrival, the town grew as a result of the marble-working industry.

2.5 miles (4.0 km) to the east of the town, near the confluence of Long Swamp Creek and the Etowah River, is the traditional site of the Battle of Taliwa, the most decisive battle of the war between Cherokee and Creek Indians in the 18th century. Cherokee history tells that the conflict over territory was determined by a stickball game here.

On September 5, 2011, due to Tropical Storm Lee, an EF1 tornado caused damage throughout the city's business and residential areas. No deaths or serious injuries were reported. Striking much of Cherokee County, including Woodstock, Holly Springs and Canton, the storms cut a 24-mile (39 km) path. Electricity was restored after two days, and residents continued clean-up for numerous days. 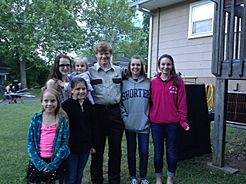 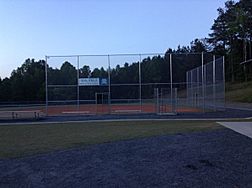 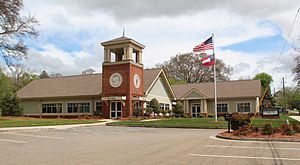 Ball Ground is located in northeastern Cherokee County, just north of Canton and south of Nelson. Ball Ground is along Interstate 575, with access from Exit 27, 4 miles (6 km) south of the highway's northern terminus, and 48 miles (77 km) north of Atlanta.

There were 601 households, out of which 33.1% had children under the age of 18 living with them, 64.3% were married couples living together, 9.3% had a female householder with no husband present, and 23.0% were non-families. 20.1% of all households were made up of individuals, and 10.8% had someone living alone who was 65 years of age or older. The average household size was 2.71 and the average family size was 2.69.

The Cherokee County Airport is located between Ball Ground and Canton.

All content from Kiddle encyclopedia articles (including the article images and facts) can be freely used under Attribution-ShareAlike license, unless stated otherwise. Cite this article:
Ball Ground, Georgia Facts for Kids. Kiddle Encyclopedia.