Woodstock is a city in Cherokee County, Georgia, United States. The population was 33,039 as of 2019 according to the US Census Bureau. Originally a stop on the Louisville and Nashville Railroad, Woodstock is part of the Atlanta metropolitan area. In 2007 it was the tenth fastest-growing suburb in the United States. 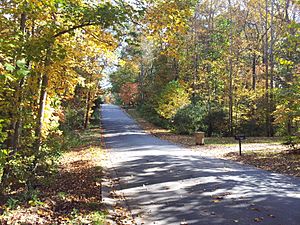 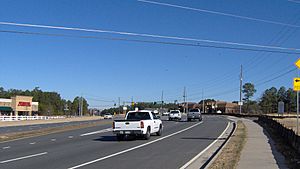 Although the first settlers called their new home Woodstock, the community did not become an official city until 1897. Postal service records show that a postmaster was in Woodstock beginning in 1833. Historic documents show the establishment of churches in the area in the 1830s as migrations of pioneers came to the community to farm the land, producing for most of their needs. Early settlements sprang up around waterways, and as the railroad and train depot became a reality in 1879, the town centered on these landmarks.

The Woodstock Depot was built in 1912 by the Louisville & Nashville Railroad as the town grew. The line transported cotton, rope, and other agricultural products, as well as passengers. Passenger service ended in 1949.

Historic homes built a century ago line Main Street. Some are home to descendants of the original owners, while others have been renovated for thriving businesses.

The Greenprints Project calls for the construction of trails along the city's natural areas like the Little River, Noonday Creek, and the U.S. Army Corps of Engineers' property, and in the city's core areas. Bike lanes, which within the project are considered trails, would be built along roads throughout the city.

The proposed trails would connect with existing trails elsewhere in Cherokee County as well as in the cities of Roswell and Alpharetta and Cobb County. The project also would preserve greenspace throughout the city and create new parks.

Greenprints Alliance, Inc. is a grassroots citizen action group formed in spring 2009 to advance the city of Woodstock's green infrastructure master plan known as the Greenprints Project. When complete, the project will add over 60 miles (97 km) of trails throughout the city connecting every public place, shopping area and neighborhood.

On May 25, 2009, the city of Woodstock unveiled the new Woodstock Memorial, 10 tons of polished granite dedicated to Woodstock veterans. It reads: "To the men and women of Woodstock, Georgia who served in the armed forces of our country preserving our freedom and our way of life Erected in their honor - May 2009 ".

A one-lane bridge over Kellogg Creek along Kemp Drive was named after 15-year-old Katie Hamlin, who was murdered in 2002.

All content from Kiddle encyclopedia articles (including the article images and facts) can be freely used under Attribution-ShareAlike license, unless stated otherwise. Cite this article:
Woodstock, Georgia Facts for Kids. Kiddle Encyclopedia.