Waleska (/wɔːˈlɛskə/ waw-LES-kə) is a city in Cherokee County, Georgia, United States. The population was 644 at the 2010 census.

The first white settlement in the Waleska area began in the early 1830s. Among these first pioneer settlers were the Reinhardt, Heard and Rhyne families, who moved into the region looking for fresh, fertile farm land. At first, these settlers lived among the Cherokee population already established in the area, but by 1838 all of the Cherokee had been forced westward to Oklahoma in the U.S. government relocation movement known as the Trail of Tears.

Early settler Lewis W. Reinhardt established a church in 1834 in the settlement known as Reinhardt Chapel and befriended many of the native Cherokee population. When the Trail of Tears forced the movement of Warluskee, the daughter of a local Cherokee chief and friend of Reinhardt's, westward, he named this settlement in her honor (see Funk Heritage Center below).

In 1883, Augustus M. Reinhardt, an Atlanta lawyer, former Confederate captain, and son of one of the founders of Waleska, along with his brother-in-law, former Civil War Lieutenant-Colonel John J. A. Sharp, founded Reinhardt Academy in Waleska for the impoverished children of Cherokee County. This school eventually became Reinhardt University.

The city was officially incorporated in 1889, over 50 years after the establishment of the original farming settlement.

While industry in Waleska's past has included tobacco farming, manufacturing, some mineral development, lumbering, and agriculture, which are both still active in the area, the chief "industry" of the town is and has always been Reinhardt University. 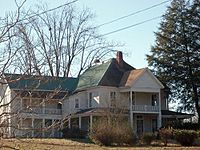 The historic Cline Home in Waleska 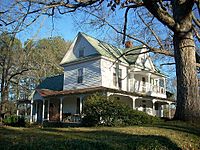 There were 107 households out of which 31.8% had children under the age of 18 living with them, 57.9% were married couples living together, 10.3% had a female householder with no husband present, and 26.2% were non-families. 23.4% of all households were made up of individuals and 8.4% had someone living alone who was 65 years of age or older. The average household size was 2.43 and the average family size was 2.81.

Waleska, which is 48 miles (77 km) north of Atlanta and 82 miles (132 km) southeast of Chattanooga, Tennessee, is the home of Reinhardt University. Founded in 1883, Reinhardt offers undergraduate and graduate degrees and is affiliated with the United Methodist Church. In addition to this main campus, the school has an off-campus site, Reinhardt University's North Fulton Center, located in Alpharetta, and offers select programs of study in Cartersville and Canton, Georgia, as well as online courses.

All content from Kiddle encyclopedia articles (including the article images and facts) can be freely used under Attribution-ShareAlike license, unless stated otherwise. Cite this article:
Waleska, Georgia Facts for Kids. Kiddle Encyclopedia.