Adairsville is a city in Bartow County, Georgia, United States. As of the 2020 census, the city had a population of 4,878. Adairsville is approximately halfway between Atlanta and Chattanooga on Interstate 75. It is 12 miles (19 km) south of Calhoun, 18 miles (29 km) northeast of Rome and 61 miles (98 km) north of Atlanta.

According to the United States Census Bureau, the city has a total area of 9.1 square miles (23.6 km2), all land.

The climate in this area is characterized by relatively high temperatures and evenly distributed precipitation throughout the year. According to the Köppen Climate Classification system, Adairsville has a humid subtropical climate, abbreviated "Cfa" on climate maps.

Adairsville used to be a small Cherokee village named after Chief Walter (John) S. Adair, a Scottish settler who married a Cherokee Indian woman before the removal of the Cherokee in 1838. It was part of the Cherokee territory along with Calhoun and including New Echota.

After the removal of the Cherokees, the village became part of Georgia, and the residents built the town keeping the name Adairsville. One of the developers was William Watts who had a lot of railroad business interest in this town. He had brought the Western and Atlantic Railroad from Atlanta (still in use). He deeded land to the railroad and surveyed business lots including hotels, mills, and blacksmith shops around the town where the railroad ran by the 1847 train depot. Watts' plan was successful and brought the town the nickname "Granary of the State"; it was incorporated in 1854. He was a town resident and had a home that was built around the foundation of an Indian cabin which is on a hill overlooking the town.

During the Civil War, Adairsville was involved on the side of the Confederate States of America in 1861 against the Union. On April 12, 1862, the steam locomotive General was pursued from Atlanta and passed through Adairsville as its people witnessed the incident during the Great Locomotive Chase. After this happened, Adairians set their own three-day street festival in remembrance of the Chase. The Civil War came to the town on May 17, 1864, in full force where the Confederate army failed to defeat Sherman and his Union army during the Atlanta Campaign. This battle is known as the Battle of Adairsville. After the Civil War ended in 1865, Adairsville rebuilt and became a hub for the carpet and textile industries, and for farm and transportation services, including its famous railroad. Some historical buildings still intact in the town include the original train depot which was involved in "The Great Locomotive Chase".

Adairsville is well known for Barnsley Gardens, which is now a golf resort. Barnsley Gardens is situated southwest of the city center of Adairsville. The home was built by Sir Godfrey Barnsley of Derbyshire, England, in the late 1840s for his wife Julia. She died before the house could be completed, but it is said that her ghost appeared to Sir Godfrey, telling him to complete the work. It was brought about by the visions of Andrew Jackson Downing, the architect who designed the grounds of the U.S. Capitol and White House. The ruins of the great main house remain. Almost lost to time and the elements, the land, including all of the ruins, was bought in 1988 by Prince Hubertus Fugger who restored the gardens and renovated the grounds into an upscale golf resort.

On January 30, 2013, at approximately 11:30 am, the city was struck by a devastating EF3 tornado, leaving one dead, dozens injured, and hundreds of businesses and residences destroyed. 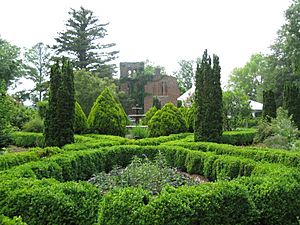 All content from Kiddle encyclopedia articles (including the article images and facts) can be freely used under Attribution-ShareAlike license, unless stated otherwise. Cite this article:
Adairsville, Georgia Facts for Kids. Kiddle Encyclopedia.