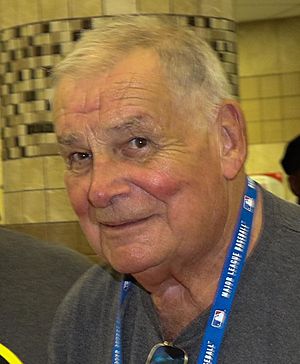 Robert Joseph Cox (born May 21, 1941) is an American former professional baseball third baseman and manager in Major League Baseball (MLB). He was born in Tulsa, Oklahoma. He is a two-time World Series champion. He played for the New York Yankees from 1968 to 1969.

He holds the all-time record for ejections in Major League Baseball with 158 (plus an additional three post-season ejections.

In 2014, he was added to the Baseball Hall of Fame. In 2019, the International League announced that Cox would be inducted into its hall of fame, noting especially his managerial experience with the Chiefs.

All content from Kiddle encyclopedia articles (including the article images and facts) can be freely used under Attribution-ShareAlike license, unless stated otherwise. Cite this article:
Bobby Cox Facts for Kids. Kiddle Encyclopedia.